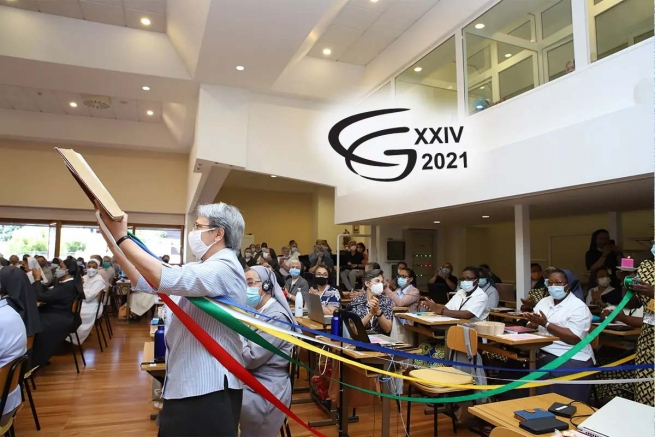 (ANS – Rome) – The reflection and study on the three nuclei of the chapter theme continues to engage the Daughters of Mary Help of Christians (FMA) gathered in Rome at the FMA Generalate for the 24th General Chapter. And it is precisely with this reflection, accompanied by the attitude of discernment in a prayerful ambiance and listening to the Holy Spirit, that the 172 sisters gathered for chapter are preparing to execute the week of elections of the Mother General (Tuesday 5 October) and the other sisters (Wednesday 6 October) called to form part of the General Council.

In the meantime, at the chapter the Word of God keeps the flame alive the hearts of the members every day. The words and actions of those present at the Wedding at Cana inspire and provide the light in the common search and discernment in daily choices. They serve also towards personal responses of faith and life, in daily events of the chapter members.

After spending several days on the First Nucleus of the draft document, entitled: “Vocational Communities: A Yes that is constantly renewed”, this week the Chapter members began studying and reflecting on the Second of the three Nuclei, dedicated to the theme: “Synodal Communities. ‘Synodal style as in Mornese'”(Jn 2:3-10).

Sr. Martha Riccioli, Provincial of the Argentine Province of “San Francesco Saverio” (ABB), moderated the introductory session on the subject. She retraced, in the biblical texts, the dynamics of the actions of Mary and Jesus, inviting the chapter members to “build inclusive communities, interwoven with intergenerational, intercultural and even inter-congregational relationships.” She further added: ”These relationships in their diversity are a precious opportunity to exercise the pedagogy of welcoming and listening, which favors the enhancement and enrichment as a whole.”

Focusing on Mary’s attitude in Cana and highlighting her proximity and closeness to the needy at the even she said: “Mary promotes loving relationships through contact and dialogue, she arouses life as caring and interdependence. She generates an environment of interaction and communication; her word opens up a dialogue which becomes the beginning and forms the invitation to change the situation. She makes sure that all the characters interact in a network of bonds, which generates a serene and cheerful atmosphere that you can breathe and enjoy.” Referring to Mother Mazzarello she continue: “Maín, in Mornese, generates this peculiar family spirit, which becomes a paradigm, model and ‘new lifestyle’, capable of including all members of the community.”

The three steps of community discernment: Recognizing, Interpreting and Choosing is being applied by a period of personal study and reflection on each nucleus, sharing about it within the Commissions and Sub-commissions and finally letting oneself be guided by the spirit.

In the Commissions and Sub-Commissions the sisters live the experience of sharing, listening, constructive dialogue, thinking together and finally discernment.

Finally, at the general assembly, the summaries of the group-works are presented, followed by a dialogue of study and sharing of experiences which are aimed at strengthening the feeling of being a synodal community on the move.