FRIENDS and SERVANTS of the WORD
30th Wednesday of Ordinary Time
October 28, 2020 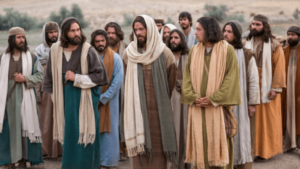 In those days he departed to the mountain to pray, and he spent the night in prayer to God.
When day came, he called his disciples to himself, and from them he chose Twelve, whom he also named apostles: Simon, whom he named Peter, and his brother Andrew, James, John, Philip, Bartholomew, Matthew, Thomas, James the son of Alphaeus, Simon who was called a Zealot, and Judas the son of James, and Judas Iscariot, who became a traitor.
And he came down with them and stood on a stretch of level ground. A great crowd of his disciples and a large number of the people from all Judea and Jerusalem and the coastal region of Tyre and Sidon came to hear him and to be healed of their diseases; and even those who were tormented by unclean spirits were cured. Everyone in the crowd sought to touch him because power came forth from him and healed them all. (Luke 6: 12-19)

How shall I live this Word?
Today’s Gospel clearly tells us that the curriculum vitae of the apostles were examined in prayer for an entire night by Jesus. He must have thought of this team by bringing together characters, sensitivities, mentalities, approaches and ways of living that are very different from each other. Their diversity, however, was held together by Christ Himself, by a communion which they would repeatedly break and restore with every repentance. The only clause was the freedom of each one, that is, even if chosen, the apostles were also free to do the opposite, to think the opposite, to choose the opposite because He does not want automatons but friends. He doesn’t want servants but children. He doesn’t want submission but love. He does not want holy cards but saints, true saints. And one can only be holy if one is free enough to choose to love or not to love. The question of freedom is the hardest thing to accept. It is always more comfortable and perhaps even more superficial to think that we are not free and that all the conditioning we undergo justifies everything. But being conditioned does not mean not being free. A sailor is no less free when he has a headwind. Perhaps it will make it harder, but sailing means using the winds to take us where we say and not where they say. Free is not one who has no conditioning but one who remembers being free despite them.

Jesus, open our hearts and our minds so that we know how to discern your plan for us and adhere to it with freedom, trust, and serenity..

The voice of James Joyce, Playwright
Tomorrow I will be what I have chosen to be today.