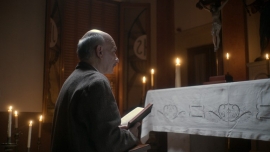 (ANS – Buenos Aires) – In view of the canonization of Artemides Zatti, SDB, we share some articles of reflection and investigation on some traits of the future saint, prepared by the Salesian Bulletin of Argentina, the country where “the relative of the poor” lived his entire Salesian life.

“There are as many stories of faith as there are believers, since each one gives himself with his own personality.”

Romano Guardini (The Life of Faith)

The vital act of faith is the personal story of the believer. If we say that at the roots of faith is a gift from God, we must also make sure that this gift is received by a person. Therefore, we need to know who the person is and his or her personality, because that is where his or her faith resides.

Faith as personal adherence to God has been a personal story for Zatti, leading him to holiness in concrete work, in caring for the sick, in the world of health care.

“I believed, I promised, I was healed”

Zatti’s Christian faith began with his baptism in Boretto, near Reggio Emilia, in the basilica of San Marco on the same day of his birth, October 12, 1880. In 1897 the Zatti-Vecchi family moved to Argentina to start a new life. They arrived in Bahía Blanca, where Uncle Luigi found them a house and the opportunity to work. On weekends they went to the parish of Our Lady of Mercede, animated by the Salesians. There young Artemis was able to deepen his faith in Jesus and get to know Don Bosco, and because of this witness, he decided to become a Salesian.

He went to Bernal to begin Salesian aspirancy, where he studied and worked enthusiastically. Unfortunately, while caring for a Salesian with tuberculosis, he also contracted the disease. The contagion was inevitable, but in spite of everything, he went on.

He arrived in Viedma to relieve the pains of his illness. There he met Fr. Evasio Garrone, a doctor, who invited him to make a promise to Mary Help of Christians to obtain his recovery, namely a commitment to devote his life to the care of the sick in the nascent “San José” Hospital in Viedma. Artemis’ response was categorical: “I believed, I promised, I was healed,” as the Flores del Campo newspaper also reported on May 3, 1915.

Believing in Mary’s intercession for his healing was a simple act of faith filled with filial love. Promising was a courageous act of trust in Providence and dedication to caring for the sick. The healing was the result of the act of faith and trust that led Artemide Zatti to be with those most in need until his death.

This fact is the turning point for understanding Zatti’s enormous work during the years he lived in Viedma. With faith he endured illness and directed his vocation, which he nurtured daily in union with God, from five in the morning until the last hours of the day.

Msgr. Carlos Mariano Pérez was the Salesian Provincial of the last years of Zatti’s life. His testimony about Zatti’s life of faith demonstrates his inner life:

“He loved God with all his heart, with all his mind and with all his strength. Prayer was like the breath of his soul, and he was convinced that he had the omnipotence of God in his hands.”

“Although material problems kept him anxious and worried, he always put the eternal before temporal things. He knew Holy Scripture and savored it, as well as the lives of the saints and ascetic treatises. All this he knew how to radiate by his example and words.”

“He was a true catechist who offered the image of a man raised in the faith, capable of transmitting a sincere and disinterested faith in Christ. The poorest sick people, the most difficult cases, or patients with the most repulsive diseases, were for him the true lightning rods of San Jose Hospital. In his mind and heart he had very clear the words of Jesus: ‘Whenever you have done these things to one of the least of these brothers of mine, you have done it to me’ (Mt. 25:40).”

In a letter that Artemide Zatti wrote in 1914 from Viedma to his relatives in Bahía Blanca, he expressed in a simple and direct way the steps he was taking in his life of faith, which, as Romano Guardini reminds us, is the story of a believer, in a concrete personality.

Here is what the letter says:

“Pray for me, who have so many needs in order to fulfill the mission that the good God in His infinite mercy has deigned to entrust to me; I do this for you every day. And with great fervor, when I think that the present life is short, very short! That of yesterday’s sufferings we have no more memory (sweet memory when one suffers for the Lord) and that the reward that awaits us is great, very great, for it is God Himself!… Sometimes I get inexplicable anguish when I think that we might lose it because of us!… But armed with faith, let us fight the Lord’s battle, and the Lord will make us deserve an eternal reward!” (Zatti’s Letters, No. 106, Salesian Historical Archives of Southern Argentina, Bahía Blanca Section).

Here one can find his deep conviction of his personal experience of God, knowing that this relationship leads him to recognize and believe in divine revelation, a mystery so great that it sustains his life given to the most needy, to his sick loved ones: “And that the reward that awaits us is great, very great, because it is God himself!”

Artemis’ faith was a true joy, knowing that such joy means entering into the dynamism of reality, in every moment. With his faith he engaged in community life, which for him had the form of the hospital, living with his sick brothers and sisters, the poor and needy, the last, the forgotten.

Thus his joy grew in intensity. It was there that the joy, the excitement, the pleasure, the personal taste of his vocation were deposited. The intensity was “a good and abundant measure.” This was the dynamism that kept Artemide Zatti, a believer and united with the transcendent, leading him to holiness.