Lahore, Pakistan, 15 March 2022 — The 7th anniversary of the death of the Servant of God Akash Bashir, a past pupil of Don Bosco.

The Cathedral of the Sacred Heart in the city of Lahore could not contain the crowd of faithful who gathered for the opening ceremony of the diocesan phase, as well as the solemn Eucharistic celebration.

In an atmosphere of immense joy, devotion, and expectation, those present listened attentively to the memory of the death of the Servant of God Akash Bashir, which took place just 7 years ago. The three members of the Tribunal and the Vice-Postulator, Fr. Gabriel Cruz SDB, took the public oath required for this ceremony. The message sent by the World President of the Confederation of Alumni of Don Bosco, Mr. Bryan Magro, was also read.

The Eucharistic celebration was presided over by the Archbishop of Lahore, His Excellency Sebastian Francis Shaw, O.F.M. , having as Concelebrator of Honour the Apostolic Nuncio to Pakistan His Excellency Christophe Z. EI Kassis, as well as all the members of the Pakistani Bishops’ Conference. Priests from all the parishes of the Diocese, representatives of all the religious congregations of the country as well as seminarians, Salesian alumni, and students at the Salesian Institute devoutly participated in the solemn Eucharist.

As a special guest, the Anglican Bishop of Lahore and the Protestant faithful joined the joy of the event by celebrating in a heartfelt ecumenical ceremony the grace of being Christian brothers and sisters.

The Apostolic Nuncio to Pakistan deeply thanked the Bashir family for the gift of life and death of their son Akash, as well as the effort and dedication of the Salesian Congregation to make this process possible. He addressed, in particular, the crowd of young people present, reminding them that life is a gift that flourishes day after day through service and prayer and that God values the courage of young people who, like Akash, are able to defend the faith and give their lives for the salvation of many. He reminded them that Pope Francis encourages everyone to be saints and that we are all called to achieve holiness. His Excellency Christophe Z. El Kassis encouraged young people to give their lives for Jesus day by day, through the daily life of service and prayer, taking Akash Bashir as a model.

March 15, 2015, is now remembered not as a day of mourning and suffering, but rather as a gift from God, the gift of the martyrdom of Akash Bashir, a 20-year-old who demonstrated to the whole world the strength of service and the incalculable value of faith. March 15 is now a day of joy, unity, prayer, and hope for the religious minority in Pakistan. 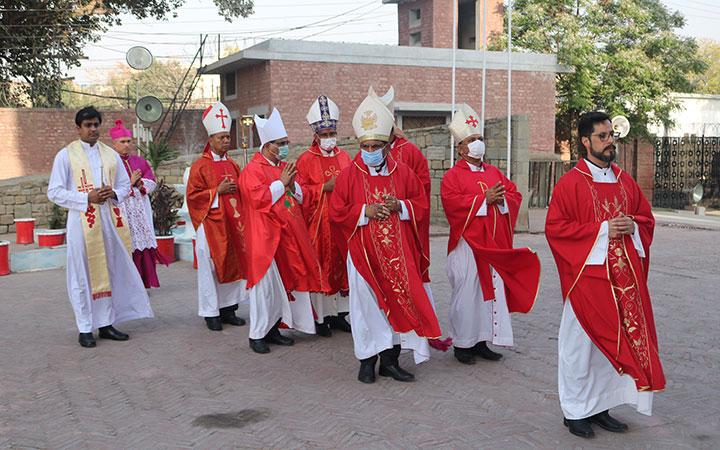 Source: Beginning of the Diocesan Inquiry of the Servant of God Akash Bashir