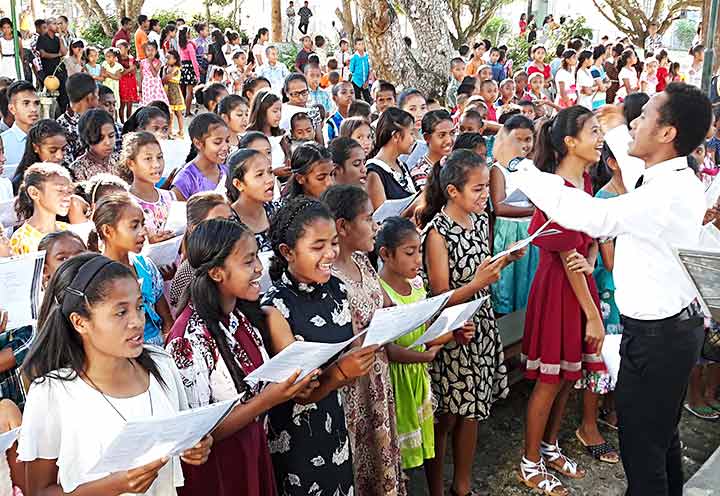 Fatumaca, Timor Leste, 5 May 2018 — Annual Oratory celebration of St. Dominic Savio with more than 1000 Oratorians from the pastoral zone of Fatumaca was also held this year in the Salesian house and Shrine of Mary Help of Christians the whole day of Saturday, May 5.

The community of Fatumaca serves the people of God in 26 different mission stations and there are about 15 Sunday Oratories with the help of local animators and small groups of Salesian novices (this year they are 21).

The boys and girls with their teachers and animator were brought by trucks (typical East Timor public transportation) befor the morning Eucharist presided this year by Fr. Klement, EAO regional council on his extraordinary visitation in our community. The liturgy and decoration was sponsored by the ADS (Friends of Dominic Savio) sodality of Fatumaca – Center Oratory, with an excellent choir and vibrant singing contributions from all Oratories. During the homily Fr. Vaclav highligthed the dream of Don Bosco, when the sheeps transform into shepherds. And he asked all young Oratorian and their animators to pray for the same ‘miracle’ also amidst the youth of Timor – to pray for more new animators, catechesits, religious, priestly and missionary vocations!

After the Eucharist until 4 PM followed a rich program with many games, sport events guided by the SDB novices (Director of Novices Fr. Anacleto Pires) around the large compound of Fatumaca Don Bosco – from the main song and dance stage in front of the Shrine until the football field with a competition among the schools.

The inscription above the altar in front of the MHC Shrine in Fatumaca does read in Tetun: ‘Diak Liu Mate, Duke Halo Sala’. (Rather death than sin!) While sharing the joy with thousands Oratorians in our parishes and mission stations, we pray that the Oratory, genial fruit of Don Bosco, will grow and continue thanks to many enthusiastic and sacrificed animators like Saint Dominic Savio!