Bind On the Breastplate of St. Patrick 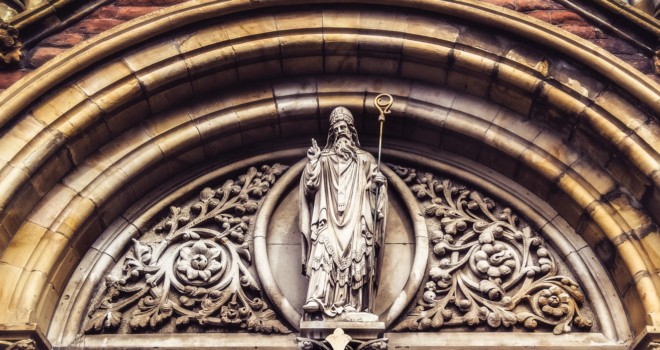 “Go, Patrick,” a voice echoed through his sleep, “thy ship is prepared! Arise and go!” Patrick arose and went with a prayer on his lips. He slipped unseen from his master’s house and fled down the western shore where he saw a ship disembarking. “Thy ship departs, Patrick,” the voice cried again in his ears. Patrick plunged into the sea and caught a rope tossed to him by one of the sailors. After being kidnapped from his coastal home in Scotland to serve as a slave of a Druid priest in Ireland for six years, Patrick, the son of a Roman deacon, was free again. It was not the first time that Patrick would spurn pagan tyranny in his life. In years to come, he would end their oppression not by fleeing, but by bringing them freedom, arising armed and protected by a great, bright Breastplate bound to his soul.

After escaping from Ireland, the young Saint Patrick traveled to a monastery in France where he met with his uncle, St. Martin of Tours. He began studying for the priesthood and was ordained under the patronage of St. Germain. After years of missionary work, Patrick was chosen to defend the Faith against the Pelagian heresy in Britain. It was then that Patrick had another life-changing dream. “Patrick,” voices called out in Gaelic, “walk once more with us.” On the recommendation of Germain, Pope St. Celestine charged Patrick to sail back to the land of his captors as a bishop and gather the Irish into the fold of God’s Church—a task abandoned by many missionaries for fear of fierce chieftains and eerie Druids.

Setting foot once again on Irish soil, Patrick and his companions were met by armed guards. But the bishop had arms of his own to guard him. He boldly announced in their native tongue that he, a runaway slave, had returned to pay ransom to his master and offer him the freedom of the Truth. While news of the stranger spread, Patrick learned of the great spring gathering of the Druid priests near the castle of the High King Laoghire in Tara. On the night of March 26—the night before Easter Sunday, 433—all the fires in the kingdom were to be put out until the Druids lit the New Year Fire. This year’s burning was regarded with special importance since the oracles had foretold that an enemy would land in Erin.

As they were making preparation, Saint Patrick mounted the Hill of Slaine, across the valley from Tara, and sent up a Paschal bonfire, bringing in the pagan new year in the Light of Christ. The Druids stood in horror at this profanity and implored that King Laoghire attack, lest the fire blaze forever in their land and conquer them all. The king commanded soldiers to swarm the Hill of Slaine and extinguish Patrick’s defiant fire. Troops labored up the hill, laden with vessels of water and earth to douse the Christian flame; but no effort on their part could quench the fire. They could not smother the flames nor slay the man who knelt in their roaring glow. A Divine power shielded both the Holy Fire and the holy man who kindled it. The pagans slunk into the darkness, defeated and dumbfounded.

When Easter morning dawned, Patrick processed with his companions towards Tara. The valley below the castle was filled with an army of Druids who uttered terrible incantations to arrest the approach of Patrick and preserve the people from his sway. As they murmured and screamed their spells, the sun was suddenly obscured and a darkness struck the bravest among them with dread. Patrick challenged the Druids to dispel the shadow and, when they failed by the power of all the gods, he called on the One God and sunlight flooded the valley. Again, the pagans retreated and Patrick marched on Tara.

Report was brought to King Laoghire, who, in wonder of such power and courage, sent word that he would speak with Patrick and learn of the God he served. The Druids were enraged at this and set an ambush for the missionaries, determined to murder this invader before he reached the king. As Patrick approached the fortress with his company, the Druids set upon them with blade and club. Then, as legend has it, Patrick and his men became a tripping herd of deer, who leapt with speed and strength through the throng of attackers chanting a mighty song of protection called the Lorica, or the Deer Cry, but now most commonly known as St. Patrick’s Breastplate:

I rise today, and I bind me

To the Name of the Trinity,

Invoking faith in the Threeness,

The Three in One, the One in Three!

I bind myself to He, to Them,

Who had His birth in Bethlehem;

He was baptized in Jordan’s stream,

And bled and died on a crossbeam,
That man’s sin could not man condemn.

By His ascension from the tomb,
By the returning Judge of Doom,
By the love of the Cherubim,
By the devoted Seraphim,
I bind myself to the Bridegroom.

I bind myself unto the power
That shall preside at judgment hour;
To wise men’s prayers and prophet’s scrolls,
To innocence of virgin souls,
And good deeds that are virtue’s flower.

I bind myself to heaven’s height:
The moon’s white glow, the sun’s gold light,
The strength of fire, the depth of sea,
The speed of wind, the tempest free,
The earth and stones’ eternal might.

I bind myself to God this day:
His eye to see, His hand to stay,
His ear to hearken to my voice,
His wisdom to direct my choice,
His word to teach me what to say.

His shield to ward my enemy,
His heavenly host to guard me
Against the snakish snares of sin,
And weaknesses that war within,
And wicked men’s hostility.

I bind myself unto that sway,
Which keeps all Satan’s spells at bay
Of prophets false and heresy,
Of wizards and idolatry:
Of knowledge that leads man astray.

For only You, O Christ, can save;
O, spare me from the drowning wave,
Protect me, Christ, from poisoned shaft,
From wound, and burn, and witches’ craft;
Be with me that I might be brave.

I rise today, and I bind me
To the Name of the Trinity,
Invoking faith in the Threeness,
Confessing might in the Oneness,
The Three in One, the One in Three!

Arriving at court before Laoghire, his queen, and his chieftains on that Easter day, Patrick was met with silence. The king had ordered his warriors to show no sign of respect to the strangers as they surrounded Patrick with their shields. But so noble was the bishop’s bearing, that despite the king’s orders, the royal poets stood in awe. “Your magicians only bring darkness,” Patrick spoke. “They cannot bring you the light.” Then and there, St. Patrick professed the Trinity, holding on high a shamrock plucked from the grass and disclosing that the secret of heaven lay in the sun beneath their feet. Moved by the eloquence of this giant, the queen and her daughters stepped forward begging for baptism, and the king granted Patrick permission to preach the Resurrection to the peoples of Ireland.

At that moment, Saint Patrick bound his beautiful Breastplate upon the soul of Ireland, facing all manner of defiance and danger as he preached, fasted, prayed, raised churches and monasteries, baptized, confirmed, and ordained. Patrick encased Ireland with the armor of a new faith and, though a Roman, became one with and one of the Irish people. The course that Patrick set Christianized the whole of Ireland within two hundred years of his ministry, making Ireland the only country in Europe to kneel before the Cross peacefully, bringing an end to slavery, human sacrifice, and tribal warfare. Saint Patrick’s Breastplate shone brightly on the breast of Ireland for centuries, granting the protection and praise of the Three in One and the One in Three.

Sean Fitzpatrick is a graduate of Thomas Aquinas College and the Headmaster of Gregory the Great Academy. He lives in Scranton, PA with his wife and family of four.