by SrDeniseSickinger | Nov 11, 2021 | Accompaniment, Ad maiorem Dei gloriam and the salvation of souls!, Choose to Love, Communion of Saints, Fraternal Love, God's love for us, Love of God and Each Other, Pilgrimage, Teens and Young Adults | 0 comments 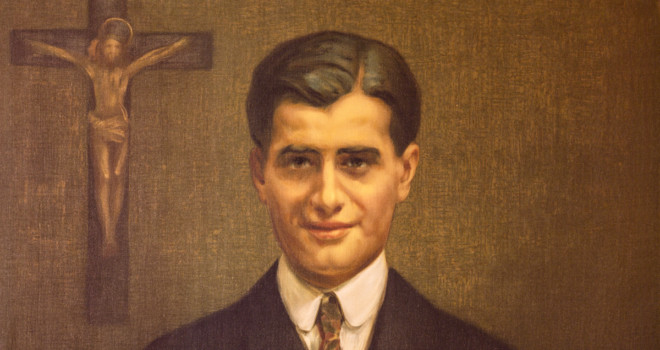 Every one of you knows that the foundation of our religion is Charity.

In the moving account of the death of Pier Giorgio Frassati writ­ten by his sister Luciana, his actions in his final hours showed the depth of his compassion for the poor and sick whom he took care of regularly.

It was Friday, July 3, 1925. He would have normally gone that day to the weekly meeting of his Conference of St. Vincent de Paul. Instead, he was bedridden with a fatal diagnosis of polio and surrounded by his grieving family. Almost completely paralyzed at this point, he asked his sister to bring some items from his study and then wrote these barely legible instructions: These are the injec­tions for Converso. The pawn ticket belongs to Sappa; I had forgotten it, renew it on my account.

Requests like these would not have come as a surprise to his friend who received this note. After all, this was how Pier Giorgio spent so much of his life — doing one unnoticed act of charity after another. Providing medicine, schoolbooks, bus tickets, food, and clothes; patiently listening; giving time, prayers, love, or whatever was needed was nothing extraordinary for him. He began exercis­ing the virtue of charity as a young boy, and it was a well-defined spiritual muscle by the time he reached early manhood. He became like a member of the family for the people he helped. They knew they could count on him.

Walking the streets of his hometown, Turin, he would have often passed by the inscription Charitas Christi Urget Nos (The charity of Christ urges us). Taken from Corinthians, this passage is etched above the entrance to La Piccola Casa della Divina Provvidenza, known locally as the Cottolengo hospital. It may have been on one of his visits to the sickest of the sick at the Cottolengo that he contracted the disease that took his life. Nobody knows for sure.

Quoting this phrase of Saint Paul in his speech to the youth of Pollone two years before his death, Pier Giorgio added, “Without this fire, which little by little must destroy our personality so that our heart beats only for the sorrows of others, we would not be Christians, much less Catholics.” True to those words, his personality was consumed by the charity of Christ.

Not only did he serve the native poor in Turin; his works of charity reached well beyond the Italian border. With his father’s appointment to Germany, the family began to spend time at the Italian embassy in Berlin. In fact, Pier Giorgio had considered continuing his college studies in Germany during this period. His academic plans changed, but his determina­tion to serve the poor was undeterred wherever he was.

It wasn’t long before he met a German priest, Father Sonnenschein, the “Saint Francis of Berlin.” With Father Sonnenschein’s network, Pier Giorgio was back on the front lines of helping the least fortunate. Famously, he gave away even his expensive overcoat to a homeless man on a subfreezing night. This incident confounded his father, who asked him why he had made such an excessive gesture. Because the man was cold was reason enough for Pier Giorgio.

Pier Giorgio also helped the poor in Austria at the request of a friend from the Pax Romana Conference. As always, he preferred to be anonymous. “There are many children and women workers in Vienna today without a roof over their heads, left prey to hunger and misery,” he wrote to his friend Maria Fischer. “I’m sending you 90 thousand crowns that I had left over from my trip and I ask you to use the money as you wish. In this my name should remain secret.”

Wherever he went, whenever he saw people in need, the natural reflex of Pier Giorgio was to find some way to help. He saw the light of Christ in each face and was a true apostle of charity, both at home and abroad. Given the extent of his travels, it is impossible to know how many lives he touched. It may be true that charity begins at home. As Pier Giorgio shows us, it certainly doesn’t have to end there.

During the homily at the Mass of Beatification, Pope Saint John Paul II reflected on the life and example of Blessed Frassati:

“He repeats that it is really worth giving up everything to serve the Lord. He testifies that holiness is possible for everyone and that only the revolution of charity can enkindle the hope of a better future in the hearts of people.”

What would a revolution of charity in the spirit of Blessed Frassati look like? What if we all arose each morning determined not to go to sleep until we had done something kind and loving for someone? Imagine a world ablaze with the love of Christ. Not only would such a world be something to see; it would be a won­derful place to live.

Pray an Act of Charity

O my God, I love You with my whole heart and above all things, because You are infinitely good and perfect; and I love my neighbor as myself for love of You. Grant that I may love You more and more in this life, and in the next for all eternity.

Editor’s note: This article is adapted from a chapter in Christine M. Wohar’s Finding Frassati: And Following His Path to Holiness. It is available as an ebook or paperback from Sophia Institute Press.

You can also stream our podcast interview with Christine M. Wohar here on Catholic Exchange as well as on Apple, Google, Spotify, or your favorite podcasting app.