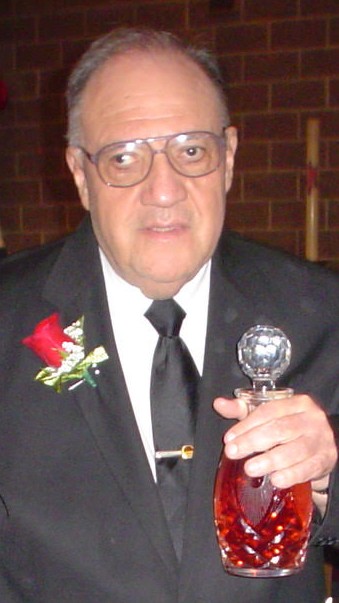 Bro. Joseph Vincent Tortorici, SDB, died early on Monday morning, February 10, 2020, at St. Philip the Apostle Residence in Tampa, Fla. He had been in hospice care for a few days, suffering from pancreatic cancer.

Bro. Joe was a professed as a Salesian coadjutor brother for more than 62 years.

Joe was born in Manhattan on March 27, 1936, to Francesco and Francesca Neri Tortorici. He was baptized at Our Lady of Peace Church in Manhattan on January 24, 1937, and confirmed there ten years later.  His father worked for the city parks department; his mother was a housewife. Joe placed them as a lower middle class family. He was the fourth of five children, all boys; one of his four brothers died early.

After his parents’ deaths, he lived with relatives in Scranton, Pa., attending Minooka Grade School (1948-1951) and South Scranton Catholic High School (1951-1955). Handicapped already in his youth by very poor vision, he specialized in musical training. In later years he explained to one of the staff in Tampa that he decided to become a Salesian after a Passionist priest encouraged him to go to the seminary in Newton, N.J., and check it out. When he was welcomed right away, he felt the Salesians were the right fit. He believes it “had to be providential” that he found the Salesians, where he felt at home for the rest of his years.

The clergy of his parish, St. John the Evangelist, recommended Joe for admission to Don Bosco Seminary in the fall of 1955:  “Joseph … has always shown a spirit of cooperation and helpfulness in parish activities. His spirit of piety and sincerity has been an edification to the priests and people.”

Joe enrolled as a Son of Mary at Don Bosco Seminary in Newton on October 1, 1955. He was admitted to the novitiate on September 7, 1956, at Newton, the house council noting his obedience, willingness, and intelligence. Unable to do close work or to study because of his poor vision, he worked in the laundry and bakery.

Joe made his first profession of vows on September 8, 1957, at Newton. He wasn’t noted especially for piety, but his musical talent was specially recognized. His admission to perpetual profession six years later described him as “docile, cheerful, sincere, open.” It also noted that he was “good in bakery, band leader.” He made his final vows on August 24, 1963, at Mount Mongola in Ellenville, N.Y., presumably at the end of the annual retreat.

Bro. Joe served the confreres and other seminarians at Newton from 1957 to 1976. His baking skills were outstanding; there was nothing in the world to compare with his bread hot out of the oven, and his cakes and pies, too, were unsurpassed. He directed the novices’ band for ten years, and he also sponsored a ham radio club for the brothers. Ham radio remained one of his apostolates for many years; thereby he helped missionaries and laity reach loved ones around the world.

He was always willing to provide music for the seminary community’s entertainment as well as religious services. Given an opportunity, he was more than happy to take part in an entertaining skit. He also entertained the novices (and brothers and staff) with monologues he’d memorized from TV comedians; favorites were “The Italian Wedding” and “Noah.” Despite his terrible eyesight, somehow he persuaded one of the brothers to teach him to drive—an experiment that ended abruptly when they were “caught in the act” of practicing by the community prefect on the grounds of Camp Don Bosco.

Father John Nazzaro—now engaged in formation ministry—writes: “Who could never forget the smell of fresh bread in the gray house in Newton…. He got us all through formation with his bread and always playing his music.”

In 1976 Bro. Joe was assigned to Don Bosco Tech in Boston, where he helped with office work, especially as receptionist. He continued as a receptionist at St. Anthony Parish in Elizabeth, N.J., from 1985 to 1994, adding ministry at the church organ. In 1994 he was posted to Archbishop Shaw High School in Marrero, La., where he assisted with the school’s band program and provided music at St. John Bosco Parish in Harvey and the assisted living home at Wynhoven Apartments in Marrero.

At a celebration of Bro. Joe’s 50th anniversary of profession in 2007 at St. John Bosco Church in Harvey, Father Jim Heuser’s homily focused on Brother’s 50 years of self-surrender in the different communities and ministries in which he served, “day after day, in season and out of season,” daily “placing his life at the disposal of God,” making his life a place where seminarians, parishioners, students, and others could meet God.

When Bro. Joe’s health began to fail, he was asked in 2014 to move to St. Philip the Apostle Residence for senior confreres at Mary Help of Christians Center in Tampa, where his music and good humor were valued by all the confreres. A word that everyone would use for Bro. Joe is “lovable.” 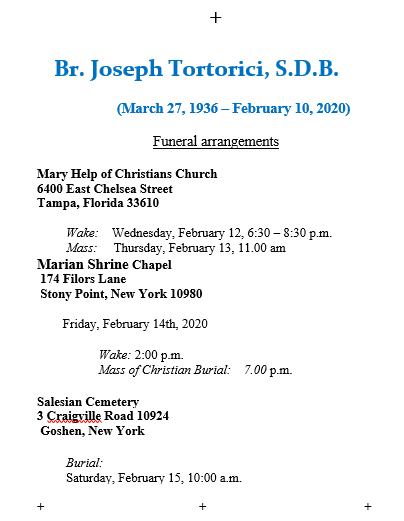