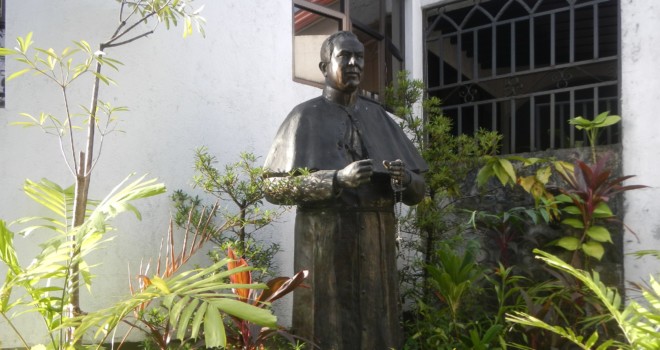 Staring his own mortality in the face and struggling beneath the weight of a terminal diagnosis of tuberculosis on the upper lobe of his right lung, Patrick Peyton sat up on his deathbed, feeling his faith ablaze like a pile of hay sprinkled with gasoline and ignited with a match. The words he had just received from one of his professors, Fr. Cornelius Hagerty, C.S.C., while visit­ing his hospital room, were the most powerful he had ever heard in his life, and they changed everything:

Patrick, who at the time was in formation to be­come a Holy Cross priest, mentally and physically had been at his worst. He was depressed and had even thought that he had lost his faith. But with those words, he invited his family and friends and anybody he could think of, to pray for healing through the intercession of Mary.

Patrick did what his former mentor suggested and prayed to the Virgin Mary for a healing, and on October 31, 1939, he believed to have felt that the cure had taken place. Eventually, the doctors examined the x-rays and told him that he was going to live, but they could not explain how it had happened. Patrick knew that it was Mary who had saved him:

With a new lease on life, Patrick finished up his studies and became a priest with a mission to spread the Rosary, a devo­tion that was instilled in him as a young child.

He was born the sixth of nine children, to a very poor farming family in County Mayo, Ireland. His mother and father, when they got married, decided that they were going to be a Rosary family. Witnessing his father getting down on his knees to lead the family in prayer each night made a big impact on Patrick.

Even as a young man, Patrick had a great desire to become a priest, perhaps beginning at the age of nine when one of his friends, John Barrett, arranged for him the high honor of serving Mass at his home parish, St. Joseph in Attymass. His dream later grew into a plan to study for the priest­hood and become a missionary, so Patrick began to write letters to missionary societies. The Redemptorists in Italy were the first to suggest the priesthood to Patrick, but nothing came of it. The Capuchins, also in Italy, appealed to him, and he believed that it was the community for him, but he never heard from them and felt dejected. At the suggestion of his parish priest, he then tried to get a scholarship from the Society of African Missionar­ies — but he was refused again.

With those rejections, Patrick began to seriously doubt his “foolish dream” of becoming a priest. He abandoned his plans by 1927, at which point he decided to come to the United States.

After he arrived in America, he searched for weeks without success for employment. Nellie set up a meeting with Msgr. Kelly, which Patrick declined, but the priest persisted and offered him a job as a sexton (janitor) in the cathedral. It was during that time working in si­lence and prayer that Patrick’s dream of becoming a missionary priest reemerged. With his desire for the priesthood reignited, but still needing to resolve the issue of his education, Patrick began his freshman year of high school at the age of nineteen.

In the spring of 1929, a band of Holy Cross Fathers passed through his area and gave a mission that he attended. During this time, he approached Fr. Pat Dolan, a priest of the Congregation of Holy Cross, and said “I want to join Holy Cross.” Perhaps he felt a connection or familiarity of a sort to his upbringing in Ireland, but he later reflected that he was attracted to their family atmosphere, charism to assist diocesan clergy, and obedience. He was accepted with the help of Msgr. Kelly’s strong letter of recommendation: “I envy the community or the bishop that finally gets him.”

Both he and his brother quickly were off to the Holy Cross Minor Seminary at the University of Notre Dame for their priestly formation. There, Patrick felt that he had found a second fam­ily, who also prayed the daily Rosary. He knew that this was where God wanted him to be. In 1932, the brothers graduated and began their novitiate. This was an intensive year of spiritual exercises that included living with and learning about the Congregation of Holy Cross.

Fr. Peyton’s Mission of the Rosary

Following the miraculous cure from tuberculosis, Patrick felt reinvigorated to continue on his journey to become a priest and to dedicate his life to the Blessed Virgin Mary through the Rosary: “I gave my heart and soul in love to Mary.” He was ordained two years later on June 15, 1941 and was given a post as the chaplain to the Holy Cross Brothers in Albany, New York, at the Vincentian Institute.

In his first years there, Fr. Peyton wanted to find a way to thank Mary for his miracle. On retreat one day, he was inspired to conceive of Family Rosary Crusade to try to reach people to encourage them to pray the Rosary, as he was convinced that his healing was given so that he might increase devotion to her.

“The family that prays together stays together” was the famous quote of Fr. Peyton that truly began to resonate with families around the world. Peyton began with the help of volunteers from the Vincentian Institute to assist him in writing thousands of letters, includ­ing to bishops and cardinals.

The first rally in 1948 in London, Ontario grew from a proposed parish mission to a successful rally with over eighty thousand families in attendance. After holding rallies in the United States, Fr. Peyton set out on a quest to bring the events to 10 million families worldwide. All told, Fr. Patrick Peyton was seen live by more than 28 million people — more than anyone else in the history of the world before the pontificate of Pope St. John Paul II. Fr. Peyton believed with his whole heart that this particular prayer would indeed be the vehicle through which we could bring greater wholeness to the Church and impact the peoples of the world.

Fr. Patrick Peyton soon realized that to reach as many people as possible he would need to make use of mass media to spread the message. At first, he got a small show on a local radio station in Albany, New York, and it was wildly successful. Fr. Peyton knew if he wanted to reach millions with the family Rosary prayer he had to be on the national level, so he went off to New York City. There he persuaded the Mutual Broadcasting System to give him airtime if he could come up with a big star to be on his radio show. He asked “who’s the most popular actor in Hollywood to­day?” Learning that it was Bing Crosby, Fr. Peyton cold called the actor. Bing Crosby agreed to be the first guest, and the show was off and running. On May 13, 1945,

Fr. Peyton asked families to pray for peace by saying the Rosary together. It was a huge success: it drew the largest audience that any program on the Mutual Broadcasting System had then experienced.

He knew he needed to go to where the stars were and where the production was happening, so next he headed off to Holly­wood. Fr. Peyton identified one of the local parishes where many celebrities worshiped and, one by one, he just asked, “Would you be on my radio show?” By February of 1947, The Family Theater Productions was launched, and he had a national radio show.

He was very intuitive in seeing that mass media — first radio and then television and films — could spread the gospel. He discovered the power of film to bring his Marian devotion to life visually and raised the funds, assembled a team of producers and writers, and shot in Spain on location the fifteen mysteries of the Rosary. This project became a vehicle for evangelization in Latin America to be able to provide a pictorial of the scenes from the life of Christ. He sent huge crates with projectors, film reels, and generators all around the world and, for some people, those films were the very first that they ever saw.

The impact that “the Rosary Priest” had was immense, and even in death he is positioned as a saintly ambassador for family prayer. Peyton’s worldwide Rosary Rallies and his far-reaching media work all stemmed from a childhood devotion and making good on a promise made to the Virgin Mary to make her known and loved to millions around the globe.

Prayer for the Intercession of Venerable Patrick Peyton

God, Our Father, Your wisdom is displayed in all creation, and the power of Your grace is revealed in the lives of holy people who inspire us to trust You more fully and to serve others more generously. In a unique way, You blessed the life and work of Your servant, Fr. Patrick Peyton, C.S.C., and made him a fervent apostle of Mary, Queen of the Holy Rosary and Mother of us all. Through his intercession, we ask for this favor (make your request). Please grant it, if it is for Your honor and glory, through Christ Our Lord. Amen.

Editor’s note: This article is adapted from a chapter in Michael O’Neil’s latest book, They Might Be Saints: On the Path to Sainthood in America. It is available from your favorite bookstore or online through Sophia Institute Press.

Check out Mr. O’Neil’s interview with our editor, Michael Lichens, who discusses the life and influence of Bl. Carlo Acutis on The Miracle Hunter.

We also recommend this article on Fr. Peyton by Fr. Donald Calloway.