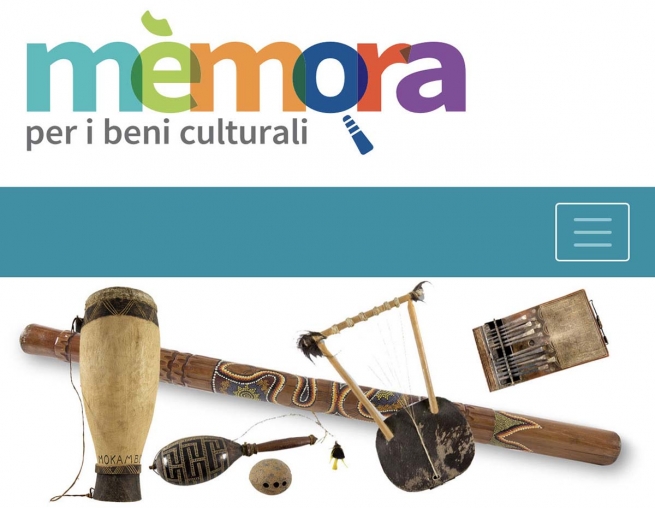 (ANS – Castelnuovo Don Bosco) – New projects have been created at the Ethnological Missionary Museum (MEM) of Colle Don Bosco through two web channels of the Piedmont Region: “Mèmora” and ” L’arte con chi ne fa parte – Art with those who belong to it”.

“Mèmora” is a showcase for the cultural heritage of museums, cultural institutes and historical archives in the Piedmont region. It is a virtual place where resources can be shared and where, through in-depth thematic studies, the heritage itself can be read by a wide audience, not just specialists in the field. The platform can be used free of charge by students, tourists or professionals, who can use it in a variety of ways, finding a museum, an archive, a photographic and natural heritage as well as various thematic and in-depth tours.

In Mèmora the MEM presents 92 objects selected from those kept in the permanent exhibition showcases and two routes linked to the theme of games and music among ethnic groups. By selecting the various menus, it is possible to gain new knowledge about the great cultural heritage that includes the collection of not only that of Colle Don Bosco Museum but also that of the other museums and organisations that have joined the project.

Created by the Piedmont Information System Consortium (CSI), the initiative was presented and made active to users on the occasion of the 38th International Book Fair, held in Turin from 14 to 18 October 2021.

“L’arte con chi ne fa parte”, on the other hand, is the initiative proposed, during the lockdown period, by the Piedmont Museums Subscription Association, with which the MEM has been affiliated since 2002.

The project, aimed at the museums of the region, consisted in identifying a representative person who would describe and illustrate the museum itself under a different avatar, characterized by anecdotes and curiosities.

The MEM chose Cardinal Giovanni Cagliero as the protagonist, as he was the first Salesian missionary sent by Don Bosco to Patagonia, in 1875, and then the first Cardinal of the Congregation in 1915. No one better than him can introduce and accompany visitors through the exhibition itinerary that begins right with the Patagonian showcase.

Starting from his meeting with Don Bosco in Castelnuovo (November 2, 1851), a synthesis of his life is covered: the years at the Oratory, the decision to remain “monk or no monk -but always with Don Bosco”, the departure towards new horizons of mission, the meeting and the work among the Italian immigrants first and subsequently with the indigenous peoples, the return to Italy for the episcopal consecration etc.,

The life of Card. Cagliero, of course, did not “physically” cross the origins and the preparation of the MEM del Colle, much later. But it can be said that the involvement of the personality of the Cardinal is an “indirect involvement” since the Museum is dedicated to him who, together with other courageous Salesians, has fulfilled Don Bosco’s dream: to expand the horizon of his work more and more to the point of embracing the entire world.

Brochure, dates and timings regarding guided tours dedicated to this topic, can be consulted at the link: https://piemonte.abbonamentomusei.it/Mostre-e-Attivita/Museo-Colle-Don-Bosco-Cardinal-Cagliero