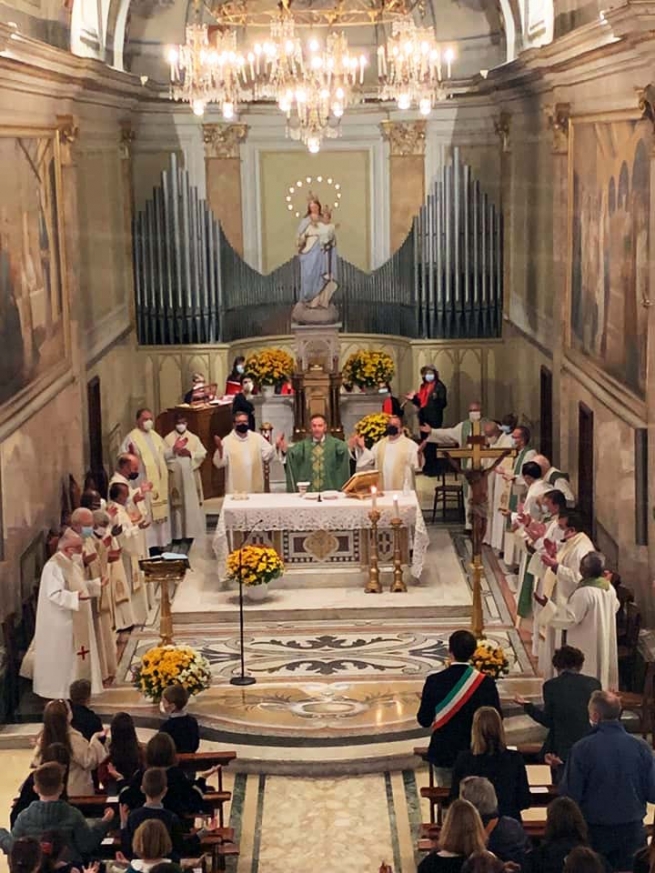 (ANS – Nizza Monferrato) – “They’re coming!” was the cry of enthusiasm with which, on Wednesday, October 27, the visit of Fr Ángel Fernández Artime, Rector Major, his Vicar, Fr Stefano Martoglio, and the Provincials participating in the mid-term review course, were welcome at the Mother-House of the Daughters of Mary Help of Christians (FMA), in Nizza Monferrato. The visit is the first from a Rector Major to this center, and occurs 150 years from the first visit of Don Bosco to this  Piedmontese town. This was part of the formation program of the course for the Provincials, as a journey to deepen the Salesian spirituality for women, in the footsteps of Mother Mazzarello and the first FMA.

The visit to the Mother House of the Daughters of Mary Help of Christians immediately began with what is most precious in it: the young people. The Vocational Training group (CIOFS-FP) of the Course for Beauticians of Nizza Monferrato illustrated to the guests the training program designed to launch the girls to enter the world of work.

Then, accompanied by Sr. Paola Cuccioli, Director of the Historical Archives of Piedmont and Valle d’Aosta and member of the ACSSA (Association of Salesian history lovers), the delegation visited the significant places of the FMA Motherhouse and Generalate of the Institute until 1929. The reference to historical events, to Salesian spirituality, to works of art, to the education of young women were some of the themes dealt-with during the visit. The former 18th century Franciscan convent dedicated to the Sacred Heart, the memorial hall, the meteorological observatory, the “Our Lady of Grace” shrine, the historical archive, the bedroom where the co-founder lived etc., were the main places visited.

At the end of the visit, there was a Eucharistic celebration with some thirty concelebrating priests. The pilgrims were joined by the parish priest, Fr Paolino Siri, and other local priests and Salesians from nearby communities. There was also a large participation of the faithful, led by the mayor, Simone Nosenzo, some members of the municipal administration, and the leading figures of the FMA of Piedmont.

In his homily, the Rector Major recalled the humble origins of the two Institutes, (that of the Salesians and that of the FMA), inviting everyone not to forget the history, and exhorted every Christian to live with fidelity, giving the best of oneself to whatever the state that the Lord has entrusted to him. He also recalled his visit to the elderly and sick sisters, and emphasized that each person serves the Lord not only when they are young, but are also called to live fully also in later phase in the situation in which they find themselves. “Let us go forward with confidence, because God will do the rest!” was the invitation he left with the assembly. Finally, he also jokingly interacted with the children present and invited parents to support their children with their education.

At the end of the Eucharist, the Rector Major visited the institute’s aeroponic greenhouse and greeted, one by one, the students of the hotel course of the CIOFS-FP institute of Casale Monferrato.

The visit ended with a moment of fraternal agape and a festive greeting and wish from the FMA community: “See you next year, don Ángel!”