FRIENDS and SERVANTS of the WORD
EASTER SUNDAY
April 21, 2019 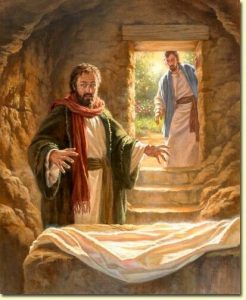 In our practical everyday philosophy we put the evidence at the end of any topic: with optimism we place a certain trust in a good to be obtained, and once we have it under our eyes, we take it for conquered. The evangelist John does not cease to surprise us by adopting the opposite dynamic: the disciple whom Jesus loved “saw and believed”. Here is the faith that is the highest virtue desired for everyone who sets out towards God. It is the crowning achievement of the expectations of those who have the courage to enter without fear into the tombs of their own depths. This is what the monk Anthony did, for example, who spent part of his ascetic experience by staying among the tombs of the Egyptians to face defeating that ancestral fear of death so familiar and often unconfessed for so many of us. Faith is the faculty that fills humanity with immortality and which highlights their call to survive death, to live endlessly in God.
In God, my life is perfectly complete from now on, because the enemy of all time – death – is defeated once and for all. Today I especially pray so that the faith I received as a gift may become increasingly conscious in me, a ‘sixth sense’ of which I have knowledge and experience, and which determines my basic attitude in dealing with various situations, until my uncertain walking gives way to the enthusiasm of running.
The Voice of J. Ratzinger, Theologian