“Education in love: affectivity and sexuality. How to accompany young people”

“Education in love: affectivity and sexuality. How to accompany young people”
08 June 2021 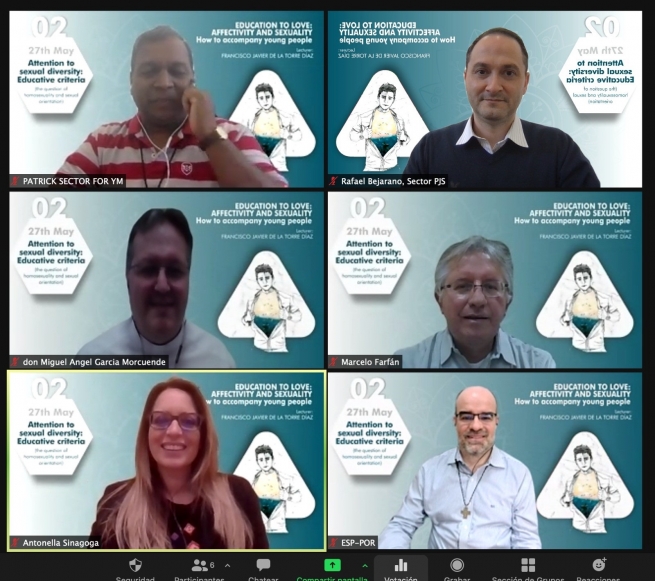 (ANS – Rome) – In the last two weeks of May and the first of June, delegates, consecrated persons and lay people from all the Provinces of the world participated in three formative sessions organized by the Youth Ministry Sector. This initiative was conceived in response to the need of the Provinces to form and share the pastoral and moral keys for the affective-sexual education of young people, thinking of educational criteria. The participation was very numerous and representative of the various realities: a total of about 580 people across three days.

With great competence and skill, Professor Javier de la Torre introduced the participants to very delicate and significant issues on an educational-pastoral level, but also on a personal level.

In the first meeting, the pastoral and moral keys for the affective sexual education of young people were provided. They started from a horizon in which there are insufficient models of sexuality education to arrive at principles of sexuality education that envisage a path of knowledge – as opposed to ignorance -, of openness and communication – as opposed to silence -, of attention and acceptance of diversity and vulnerability. A path that leads from “sentimental illiterates” to tune the strings of affection, to moderating desire in a consumerist society, to valuing limits, to rules, to strengthening oneself as educators in prudence and equilibrium.

In the second meeting, attention was paid to sexual diversity (the question of homosexuality and sexual orientation), focusing on educational criteria as a pastoral field. They went beyond the theories, beyond the clichés, with an orientation of encounter and pastoral accompaniment.

The third webinar focused on young people and sexuality from the perspective of the vulnerabilities associated with them, and therefore on social networks and pornography (risks and escapes), the power of the media, loneliness, the fragility of families and violence. The body in transition and the experiences it entails: the desert within youth.

It was very interesting to see how sex education has changed after Amoris Laetitia and Evangelium Gaudium, through pastoral care of the “sexual” bond that provides educational attention to the need for acceptance, esteem, affection, care, relationship, love and sexuality.

Hence the need to educate in gestures of love and body language, the desire to truly give oneself (Amoris Laetitia 284). From the love of oneself and for oneself to the love of the other for the other, and then with the other for others; educating to openness beyond the rules and to denounce evils. Thinking about paths of growth and formation of conscience, of self-knowledge and self-mastery and development of abilities (AL 280); paths of growth and maturation towards love and encounter with the other. Educating about limits, norms and challenges. Educating a responsible sexuality with meaningful and current experiences to work on inclinations, habits, virtues, decisions.

Accompanying frailties by ensuring that they are integrated into communities in the logic of mercy and the logic of growth.