Feast of John the Baptist

In those days, Paul said: “God raised up David as king;  of him God testified,  I have found David, son of Jesse, a man after my own heart; he will carry out my every wish. From this man’s descendants God, according to his promise, has brought to Israel a savior, Jesus. John heralded his coming by proclaiming a baptism of repentance to all the people of Israel; and as John was completing his course, he would say, ‘What do you suppose that I am? I am not he. Behold, one is coming after me; I am not worthy to unfasten the sandals of his feet.’ My brothers, sons of the family of Abraham, and those others among you who are God-fearing, to us this word of salvation has been sent.” (Acts 13: 22-26) 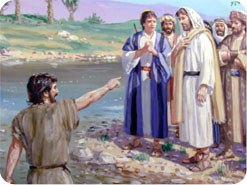 The today’s passage from  Acts is part of Paul’s proclamation of Christ on his first missionary journey together with Barnabas. It was located in the synagogue of Antioch of Pisidia, an area of ​​present-day Turkey. Retracing the main stages in the history of Israel, Paul comes to present Jesus as the fulfillment of God’s promises, thanks to the coming of Jesus Christ, to His death and resurrection. In this revival of the history of salvation an important role is given to John the Baptist, the saint we are celebrating today. John said at the end of his mission, “I am not He! Behold, one is coming after me; I am not worthy to unfasten the sandals of His feet.” In this discourse John re-dimensions himself. To those who thought he was the Messiah he says, ‘I am not the one you suppose!’ And he proclaims the one who follows him, who is much greater than him in dignity. The Baptist clearly affirms the absolute superiority of the Messiah; he is only His witness and in front of Him he feels less than a slave. John claims nothing for himself and claims to be only ‘a voice crying out’ in the service of the Messiah. The Forerunner was only a finger pointed towards the Messiah, he indicated His presence, and then withdrew and disappeared. John, therefore, hastening to ‘decrease’ so that ‘He may increase’, immerses himself in solitude and disappears in the extreme witness of martyrdom, which highlights his faith and allows the servant to conform to his Lord. John the Baptist clearly gives us his task and his humility. Like him, we try to put ourselves at the school of the Word. In this way we will know the will of God for our life. And it will be peace.

The Voice of  St. Peter Damian

John was the forerunner of Christ with his birth, his preaching, his baptism, and his death. He started this mission while still in his mother’s womb. He could not yet make his voice reach human ears, and already, leaping in the womb of his mother Elizabeth, he alerted her to the presence of the King of Heaven, hidden in the womb of the Virgin. This made Elizabeth say, ‘As soon as the voice of your greeting reached my ears, the child rejoiced in my womb’ .