FRIENDS and SERVANTS of the WORD
Fourth Monday of Ordinary Time
Feast of St. Blaise
February 3, 2020

As they approached Jesus, they caught sight of the man who had been possessed by Legion, sitting there clothed and in his right mind. And they were seized with fear. Those who witnessed the incident explained to them what had happened to the possessed man and to the swine.
(Mark 5: 15-16) 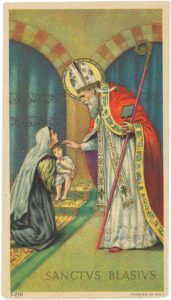 The fact of the pigs is oddly interesting. The miracles that Jesus was carrying out (and they were almost always healing from serious evils) amazed the crowds. From a certain point of view, no one is surprised at the admiration for miracles that aim at the good of people. Here we notice a fact: the man of all times often prefers to save material goods rather than face the effort of living choices ordered the best good. Let the swine go to perish in the sea! What happens immediately is very significant. The people, who have suffered the loss of the pigs, are upset because they represented remarkable wealth. What comes next is even more symptomatic: they want the Rabbi Jesus to go away from their country. The meaning of all this is very clear. The choice is between material wealth or the evidently salvific gestures like the messianic gestures of Jesus which count more for they bring life and salvation for everyone?

Lord, humanity of all times and places is always tempted to privilege material wealth. On this society which is so ‘greedy’ for pleasures dear to the senses, pour out the light to make right and courageous choices.

The voice of Church Tradition

St. Blaise is venerated both in the East and in the West. For his feast, the ritual of the ‘blessing the throat’ is widespread, made by placing two crossed candles on the throat or anointing it using blessed oil), while the intercession of the Saint is invoked. The act is linked to a tradition according to which Bishop Blaise prodigiously freed a child from a fish-bone stuck in its throat. As Bishop, he governed the community of Sebastes in Armenia when freedom of worship was allowed to Christians in the Roman Empire in 313, under Constantine and Licinius, both ‘Augusti’, that is emperors. Licinius governs the East, therefore he also had Biagio among his subjects. We know that he died a martyr around the year 316, that is, after the end of the persecutions.
O dear brother St. Blaise, intercede for us with God so that, far from letting ourselves be dominated by greed, we may live in good health by praising God and doing good among our brothers and sisters.
__________________________________________________________________________