FRIENDS and SERVANTS of the WORD
Fifth Monday of Ordinary Time
February 10, 2020

Whatever villages or towns or countryside he entered, they laid the sick in the marketplaces and begged him that they might touch only the tassel on his cloak; and as many as touched it were healed. (Mark 6: 56) 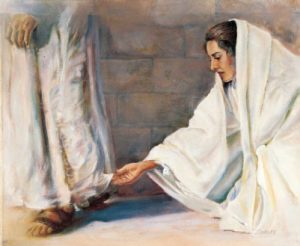 “… they begged him that they might touch only the tassel on his cloak …”. The need to touch Him or touch His cloak reminds us of other scenes from the Gospel of Mark. In fact, He had healed many, so that those who had some illness tried to touch him. The woman with the hemorrhage had heard of Jesus. She came into the crowd, behind Him, and touched His cloak. In fact, she said: “If I can only touch His cloak, I will be healed.”

The verb ‘ touch’ expresses with a material image, what faith is: a personal contact with Jesus, from whom you receive a gift that rehabilitates and makes you live. What are the sacraments if not an experiential way of entering into a relationship with Him? To ‘touch Him and be saved’? The touch of ‘faith’ is a touch that changes life and releases the power of Christ. We can ‘touch’ Christ through many motivations (curiosity, challenge, superstition …), but only the touch of faith ‘saves and gives life.’

The voice of Pope Francis, Morning Meditation, Monday 9 February 2015
Precisely in the Gospel of Mark (6: 53-56), we see ’the other creation’ of God that is of Jesus who comes to ‘re-create’ what was ruined by sin. […] And we see Jesus among the people. In fact, Mark writes: «When He got out of the boat, people immediately recognized Him and, running from all over that region, they began to bring the sick to Him on stretchers, wherever they heard He was; and those who touched Him were saved.” It is ‘re-creation’ and the Liturgy expresses the soul of the Church in this, when she makes one say in a beautiful prayer:” Oh God, You created the universe so wonderfully, but more wonderfully You recreated it in redemption. This ‘second creation’ is more wonderful than the first; this second work is more marvelous.” __________________________________________________________________________
Daughters of Mary Help of Christians, Via dell’Ateneo Salesiano 81, 00139 Rome, Italy E-mail: srmterzo@gmail.com  Website: www.sanbiagio.org info@sanbiagio.org