FRIENDS and SERVANTS of the WORD
Fifth Saturday of LENT
April 4, 2020 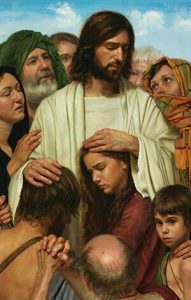 But one of them, Caiaphas, who was high priest that year, said to them, “You know nothing, nor do you consider that it is better for you that one man should die instead of the people, so that the whole nation may not perish.” He did not say this on his own, but since he was high priest for that year, he prophesied that Jesus was going to die for the nation, and not only for the nation, but also to gather into one the dispersed children of God. So from that day on they planned to kill him. (John 11: 49-53)

Jesus is wanted: at the center of the Easter feast in Jerusalem there is no longer the Temple, but now only Him. Everyone awaits Him suspended: both those who want to immolate Him as an atoning victim, and those who place in Him the hope of true happiness. Even today, on the part of men and women, He continues to be pulled on both sides: there are those who would like to use Him to serve their purposes, those who would like to put their hands on Him and eliminate Him, demonstrating to themselves and others that the Gospel is all an illusion!
However, He continues to be the protagonist of the story – above all of His own story – when He chooses to give His life for everyone, not only for the good but also for the bad, not only for those who love Him but also for those who detest Him, not to be acclaimed but for pure love, so that in front of this unsurpassed love, every knee will bend, every closure will fail, every heart will open.

I will take in hand the account of the Passion according to John, and I will attentively look at the attitudes and behaviors of all those the Evangelist includes in recounting the last hours of the life of Jesus.