From that place he went off to the district of Tyre.  He entered a house and wanted no one to know about it, but he could not escape notice.  Soon a woman whose daughter had an unclean spirit heard about him. She came and fell at his feet.  The woman was a Greek, a Syro-phoenician by birth, and she begged him to drive the demon out of her daughter.  He said to her, “Let the children be fed first.  For it is not right to take the food of the children and throw it to the dogs.”  She replied and said to him, “Lord, even the dogs under the table eat the children’s scraps.”  Then he said to her, “For saying this, you may go. The demon has gone out of your daughter.”  When the woman went home, she found the child lying in bed and the demon gone. 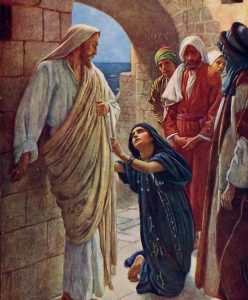 Jesus leaves Galilee and is in pagan territory. His desire was to go unnoticed, but He cannot: Jesus is known, sought, and found there. The trust of this pagan woman, who intercedes for the healing of her daughter, knows how to go beyond Jesus’ reluctance. The good of her daughter leads her to ask, to knock beyond Jesus’ answers. The certainty that fills the heart of this mother manages to share the gift of salvation not only “for the children”, the crumbs of salvation reach everyone, even the dogs (the pagans). The Syro-Phoenician woman entrusts herself with a disarming simplicity to this gift of Jesus and the miracle takes place.