Film on Don Bosco made in 1935 returns to light 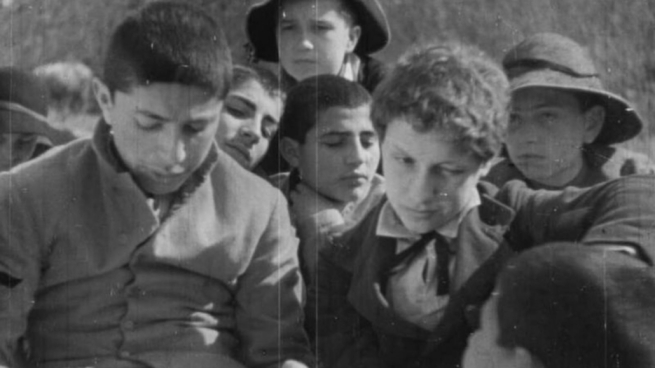 (ANS – Turin) – As part of the 39th Turin Film Festival, the Experimental Center of Cinematography – National Cinema Impresa Archive and the Salesian Headquarters presented the digitally restored version of the feature film “Don Bosco”, directed in 1935 by Goffredo Alessandrini and produced by Riccardo Gualino for the nascent Lux Film. The religious film tells the life of the Piedmontese saint from his childhood in the Monferrato countryside up to his seminary days. It also presents the educational and social activity carried out in Turin with the children of the humblest of the social strata to the foundation of the Salesian Work leading up to his canonization.

In the era of digital films, the restoration of old films remains the last opportunity to literally handle those long strips of celluloid that have made generations of spectators dream. It is super-specialized work, which only film libraries and archives are able to do. The Torino Film Festival has built a section around it titled: “Back to Life”, which this year presents five gems from the past that have indeed been brought back to life. The oldest is the film “Don Bosco”, produced in 1935 by Goffredo Alessandrini in his early thirties. The film was shot in Turin, Chieri, Monferrato, and the Fert-Microtecnica Studios. To make the film, 40,000 meters of film were used to craft a montage of 2,500 shots. The cost of the film making was over 2 million lire at the time.

The work represents a classic example of a hagiographic genre but enriched with a sophisticated language and skillful solutions. The usage of low-shots to depict the little boy Johny Bosco, or shadows to depict his priestly formation and usage of panaromic shots for depict sceneries – all underline the director’s unique touch. The outdoor shots are particularly interesting! The shots depicting the countryside and the agricultural work in the fields that form the background of the days of the young Johny Bosco today represent a precious ethnographic source of the territory.

In the first version of Don Bosco released in April 1935, one year after the canonization of the Saint of Youth, the director, Goffredo Alessandrini, who included an “invented” episode from the saint’s life in the film. This creative freedom provoked protests and discontent to the point that the scene in question had to be redone, making the action more realistic. The second version, released in the following September, which was then followed by a third version, defined the vulgate of the film and gave rise to a proliferation of variants both in Italy and abroad. After long research, it had been decided to reconstruct digitally the second version.

Director Goffredo Alessandrini speaking about the film would later say: “In the film, there was only one professional actor. All the others were taken from the street, as they say. But the priests were authentic Salesians, who made themselves available. I was also so interested in the places where we filmed. I remember certain convents like that of Chieri. And I still remember that that winter of Turin which had turned it a snow-white city, but with the sun and a blue sky.”

“The really beautiful parts are the nature scenes,” confirms Sergio Toffetti of the Archivio Nazionale Cinema d’Impresa (National Cinema Archives Company). “They are shot in a very evocative, contrasting, almost Macchiaioli-style black and white. John Bosco is played by Gianpaolo Rosmino, a supporting actor in many silent films, such as ‘Ma l’amor mio non muore’ (My Love never Dies). Up to that time, director Alessandrini had only made two comedies, whereas he would later direct very beautiful films such as ‘Luciano Serra pilota’, ‘Giarabub’ and ‘Noi vivi’. Today he is a somewhat a forgotten director, and for this very reason the screening of his ‘Don Bosco’ is an excellent opportunity to re-evaluate him and learn about his cinematographic history”.

The reconstruction, digitization and image cleaning operations were carried out for the National Cinema Archives Company by Ilaria Magni, Diego Pozzato and the manager Elena Testa. The restoration began with the negative conserved in the Fondo Salesiani (Salesian Sources) deposited by the Headquarters of the Salesians of Don Bosco in Ivrea in 2016. While the second part of the copy was perfectly preserved, the first part had suffered a quality loss, and was reconstructed thanks to a positive copy from the Film Library of Bologna and a positive copy from the National Cinema Museum and the two 16mm copies kept in Ivrea. For the second half, on the other hand, the original negatives from the Salesian collection conserved in Ivrea was used almost entirely, except for the “Generala” scene, which was reconstructed with the positive copies and for which it was essential to use as a sound reference a copy preserved at the “George Eastman Museum” in Rochester, in the United States, the oldest museum in the world dedicated to photography and one of the oldest film archives in the world.

The film is part of the Salesian Congregation’s “film archive” setup in 2016 at the CSC-Archivio nazionale cinema impresa (CSC National Cinema Archives Company), consisting of around 500 films that offer valuable documentation of the presence of the Salesians in many countries around the world. This collaboration had already led to the identification and recovery of little-known or unknown titles such as “I 26 martiri del Giappone” (The 26 Japanese Martyrs), a film directed in 1931 by Tomiyasu Ikeda, on the persecution and martyrdom of Christians in the Tokugawa era; and “I conquistatori d’anime” (The Conquerors of Souls) directed by Renzo Chiosso and Felice Minotti.

The reconstruction, digitization and cleaning of the image were carried out for the Archivio Nazionale del Cinema d’Impresa by Ilaria Magni, Diego Pozzato, and the person-in-charge Elena Testa. The restoration started with the work on the negatives preserved in the Salesian Archive deposited into the Directorate General of Works Don Bosco in 2016 in Ivrea, integrating the gaps with sequences preserved at the National Cinema Museum, the Cineteca di Bologna, and the “George Eastman Museum” of Rochester, United States.