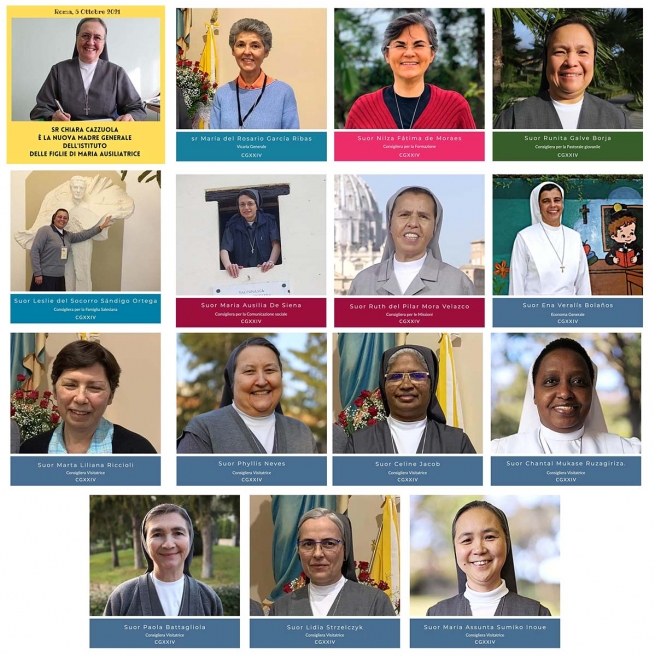 (ANS – Rome) – With the elections of the last three sector Councilors – Missions, Social Communication, Administration – and of the seven Visiting Councilors, designated on Friday 8 and Saturday 9 October, the General Council elected by the 24th General Chapter of the Daughters of Mary Help of Christians (FMA) has been completed.

The FMA Chapter members gathered at the Generalate of the Institute in Rome elected Sr. Ruth del Pilar Mora, a Colombian and the former Superior of the Vice Province of Africa Ethiopia Sudan South Sudan (AES) to head the Missions sector. Born in Labateca on September 6, 1966, she made her religious profession in 1988. The following year she graduated in Educational Sciences at the “Auxilium” Faculty in Rome, and after holding various positions in Colombia and in Rome, as a collaborator in the Youth Ministry sector, she served as a missionary in Africa for almost 20 years, developing humanitarian, educational and vocational training activities in favor of hundreds of young people and women.

Sr. Ena Veralís Bolaños, born in Santa Ana, El Salvador, on 17 September 1968, was elected as the Economer General in the Administrative sector. She graduated in Business Administration in addition to a diploma in Theology and the course for Formators at the “Auxilium” Faculty of Rome. She worked for 20 years in various houses of her Province, which include the houses of the FMA in Guatemala, Honduras and El Salvador (CAM), then was the Councilor and later its Provincial (2012-2018).

The 24th General Chapter of the FMA has also elected seven Visiting Councilors, who are delegated by the Superior General to visit the FMA Institute to promote a constructive and continuous relationship between the Provinces and the General Council. This offers the General council a better knowledge of the state of the congregation, and aids fostering apostolic action and enhancing the various cultures in full fidelity to the Church and Don Bosco.

Specifically, the FMA Chapter members confirmed as Visiting Councilors for a second six-year term are:

Elected for a first term as new Visiting Councilors:

– Sr. Celine Jacob, born in Kottayam, India, on 25 January 1963, former Provincial of the Indian Province “Sacred Heart of Jesus” (INK), based in Bangalore;

– and Sr. Marta Liliana Riccioli, born in Buenos Aires, Argentina, on 20 December 1957, and former Provincial of the “St. Francis Xavier” Province (ABB), based in Bahía Blanca.