Getting to know Don Bosco: his prophetic dream of the rose arbor 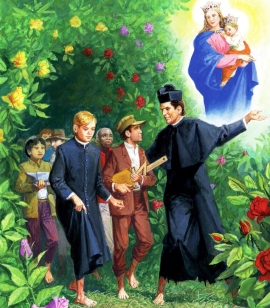 (ANS – Rome) – “We are children of a dreamer” is an expression often used by his successors to refer to the Founder of the Salesian Congregation and Family. And this is not only because of his ability to see far beyond his contemporaries, foreshadowing developments and realities that would be openly manifested only much later; but also because of that mystical ability of his to have as it were “supernatural visions” capable of directing his own path and that of those who followed him.

Countless were the dreams reported by Don Bosco, some certainly more significant and relevant than others. The 9-year dream, whose Bicentennial will be celebrated next year, 2024, constitutes among all of them not only the chronological leader, but also the load-bearing lintel of the entire life and action of the Saint of the Young.

In the great skein of dreams dreamed by Don Bosco, today we want to recall in particular the one known by the name of the “bower of roses.” It is, among all, a dream that helps to bring the figure of this giant of holiness closer to everyday reality, recalling how all that he heroically accomplished can appear linear and simple only from a distance, almost a series of actions that from a given premise determine their logical consequence. In truth, all his immense work, constantly sustained by divine grace, literally cost sweat, tears and blood, which Don Bosco did not fail to shed for two very simple reasons: his immense love for God, Jesus, and Mary; and his equally immense love for his young people.

In recounting that dream, which we report here by summarizing some parts for brevity’s sake, Don Bosco states, “One day in the year 1847, having much meditated on the way to do good to the youth, the Queen of Heaven appeared to me and led me to an enchanting garden.”

Don Bosco describes the garden, then continues: “There was an arbor that extended as far as the eye could see, lined and covered with rose bushes in full bloom. Even the ground was all covered with roses. The Blessed Virgin said to me, ‘Take off your shoes!’ , and since I had taken them off, she added, ‘Go ahead through that arbor; that is the path you must take.’

I began to walk, but immediately I noticed that those roses concealed very sharp thorns, so that my feet were bleeding. So having taken just a few steps, I was forced to turn back.

‘Here we need shoes,’ I then said to my Guide. ‘Certainly,’ she answered me; ‘you need good shoes.’

I put on my shoes and set off again with a number of companions, who had asked to follow me. The arbor appeared increasingly narrow and low.

Many branches drooped and rose like streamers; others hung perpendicularly above the path. They were all covered with roses, and I saw nothing but roses on either side, roses above, roses in front of my steps. While I still felt vivid pains in my feet, I touched roses here and there, feeling even more stinging thorns; and I was pricked and bled not only in my hands, but all over my person. Above even the roses that hung concealed very prickly thorns, which stuck in my head. Nevertheless, encouraged by the Blessed Virgin, I continued on my way.

Meanwhile, all those who observed me said, ‘Oh, how Don Bosco always walks on roses! He goes forward calmly; all things go well for him.’ But they did not see the thorns that lacerated my limbs.”

At that point, Don Bosco narrates that many priests, clerics, and lay people who followed him abandoned him, defeated by the pain of the thorns and feeling deceived by Don Bosco himself.

However, another crowd of priests, clerics, and lay people replaced the first group, consoling Don Bosco and accompanying him in his trials until he arrived “in a beautiful garden, where his few followers surrounded him, all emaciated, disheveled, bleeding. Then a light breeze arose, and with that breath, they all healed as if by magic.”

And still later Don Bosco saw himself transported to a very spacious hall “of such richness that no palace in the world can boast its equal. It was all sprinkled and adorned with the freshest and thornless roses from which emanated a most suave fragrance.”

The explanation of the dream to Don Bosco was given by the Virgin Mary herself: “Know that the path you walked among the roses and thorns signifies the care you have to take of youth: you must walk there with the shoes of mortification. The thorns on the ground represent the sensitive affections, the human sympathies and antipathies that distract the educator and divert him from the true goal, wound him, arrest him in his mission, prevent him from gathering merits for eternal life. Roses are a symbol of the ardent charity that must distinguish you and all your coadjutors. The other thorns mean the obstacles, the afflictions, the sorrows that will touch you all. But do not lose heart. With charity and mortification, you will overcome everything and reach the roses without thorns.”