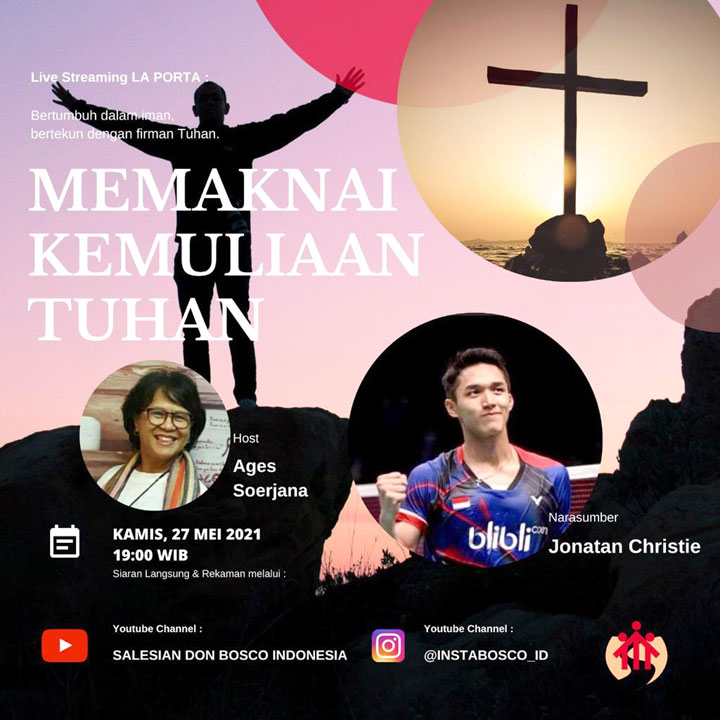 Jakarta, Indonesia, 7 June 2021 — Indonesia is one the few countries in the world that have been producing the world best badminton athletes. Today, the country has Jonatan Christie, 23 years old Catholic, who occupies the 7th position of the world men’s singles rankings according to the latest update of BWF World Rankings.

Jojo, as he is best known in Indonesia, spontaneously gave his quick response “yes” when he was asked to be the guest on the regular Thursday evening live show in Salesian Don Bosco Indonesia YouTube channel. He was asked just about 2 weeks before the show. He knew that the event was purely a religious activity as he was expected to share his faith experience to the majority Catholic audience.

The show was held on Thursday evening, 27 May 2021, at 19:00 Indonesian time. In that talk show, he was sharing  his understanding of the glory of God and how he lives in the spirit of gratitude for the greatness of the Lord that has been so vital for his life as a young Catholic and a national and international badminton player.

Jojo encouraged his fellow youth to glorify the Lord in whatever undertaking according to each one’s profession and career. This is where a person can be considered meaningful to his or her own life and the life of others. Everyone should accept the fact that he or she is merely the instrument that God uses to show or reveal His glory to the world.

Among his best achievements both in national and international titles, it is one that Jojo is very much remembered for by Indonesians for his gold medal at the latest Asian Games held in Jakarta in 2018.