Italy – Fr Felice Canelli, a “universal brother” for the needy 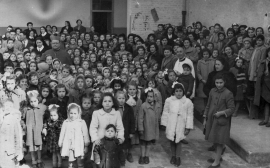 (ANS – San Severo) – “Religion is the interpenetration of the needs of others”; “What is our altar? The Tabernacle of the Temple and the hand of the poor”. These are two expressions of Fr Felice Canelli, priest of the diocese of San Severo (Foggia, Italy) and Salesian Cooperator, today recognized by the Church as a Servant of God. They are two mottos that he himself lived first: for almost a century (1880-1977), moved by his faith in Jesus, he was the “universal brother” – using an expression of Pope Francis – of many poor, young, abandoned people who resorted to him.

It was precisely faith that made him sensitive to material and spiritual needs because whoever follows Jesus does not alienate himself from concrete life or theorize about solidarity, but on the contrary, becomes more human.

Why he was everywhere: first on the altar in profound dialogue with God, then in the hovels of the poor around the city outskirts, in the homes of the rich to ask for economic aid for his many charitable works, on the stage of a political rally, as secretary of the Partito Popolare to ask for just laws for everyone starting with the excluded, in his office as a sought-after confessor-director of spiritual life, in the parish courtyard to play with the little ones, in the schools of the city to talk about the joy of the Gospel, at the bedside of the dying, in front of the door of the municipal administration to ask for help for all the needy …

His lean, wiry physique seemed a concentrate of energy when it came to defending the rights of God and the poor. Strong as a lion, but tender as a father for all the excluded, Fr Canelli did not stand by the window looking at the harsh existence of the poor, but did his utmost for them in every way, and with the audacity of Christian charity he invented ways of closeness and solidarity.

In October 1919, an extraordinary tax was announced on the wine stored away in people’s cellars. There was yet another popular revolt: hunger, poverty made the nerves of the poor people tense as strings. Fr Canelli wrote a telegram to the Minister of Agriculture, of the Interior and of Cults, requesting the reduction of the tax and the facilitation of the sale of wine, and a second telegram to the Hon. Mucci, a convinced local socialist – who also left for Rome to plead the cause of the winemakers – to point out that, despite ideological differences, it was possible to become a “we” for the common good.

Again: in 1910-1912 cholera broke out in San Severo, which aggravated the already precarious living conditions for almost all of the population. The city faced grave adversities: without bread and without medical aid. Fr Canelli, assisted by Graziana Russi and Luisa Lacci, took an interest in the poor sick, first with modest financial means of their own, then helped by wealthy families and the Municipality, creating a circular movement of humanity, faith and solidarity.

And together with the medicines he brought a plate of pasta, seasoned with a smile and hope, he brought God’s closeness, tenderness and compassion to the sick.