Jesus died for me…

Jesus went out with his disciples across the Kidron valley  to where there was a garden,  into which he and his disciples entered. Judas his betrayer also knew the place,  because Jesus had often met there with his disciples… So the band of soldiers, the tribune, and the Jewish guards seized Jesus, bound him, and brought him to Annas first.  Then Annas sent him bound to Caiaphas the high priest. Then they brought Jesus from Caiaphas to the praetorium. It was morning.  So Pilate went back into the praetorium  and summoned Jesus and said to him,  “Are you the King of the Jews?” Jesus answered, “Do you say this on your own  or have others told you about me?” Pilate answered, “I am not a Jew, am I? Your own nation and the chief priests handed you over to me. What have you done?” “My kingdom does not belong to this world. If my kingdom did belong to this world,  my attendants would be fighting  to keep me from being handed over to the Jews. But as it is, my kingdom is not here.”… “I find no guilt in him. But you have a custom that I release one prisoner to you at Passover. Do you want me to release to you the King of the Jews?”… “Shall I crucify your king?” The chief priests answered, “We have no king but Caesar.”… Then he handed him over to them to be crucified… After this, aware that everything was now finished, in order that the Scripture might be fulfilled,  Jesus said, “I thirst.” There was a vessel filled with common wine. So they put a sponge soaked in wine on a sprig of hyssop  and put it up to his mouth. When Jesus had taken the wine, he said, “It is finished.” And bowing his head, he handed over the spirit. (John  18: 1-2, 12-13, 24,28; 19: 10-16, 28-30) 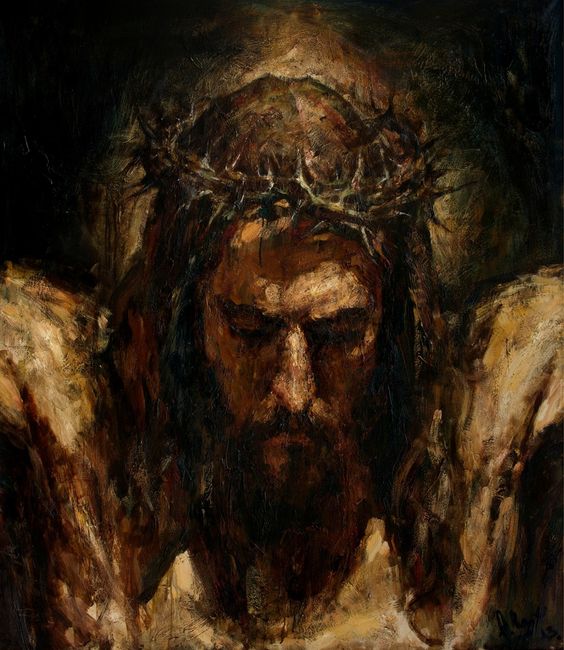 There is a central axis, a red thread in the “Passion of our Lord Jesus Christ” and we see it unfolding around the verb to deliver. The meaning does not revolve around a mere passage, rather around the agreement which determines the passage. For which it marks itself, it authenticates itself, it is sealed in a complete way. But what is sealed? First of all, a trust. Here the keys of the car that requires care are not handed over, or the car to the parking attendant who requires custody, but the Life of the Son of God. Judas hands over Jesus, the soldiers first deliver him to Anna, these to Caiaphas, Caiaphas to Pilate, who “handed him over to be crucified” (19:16a). But the passion continues with another consignment: “And, bowing his head, he handed over the spirit” (19:30). Jesus does not die: he gives us the Spirit, His very life. This ability of Jesus to give Himself up can only be understood if we do not separate Jesus from the Father. We must place His identity in the Father and a Father who for man, created by Him, is willing to do everything up to “giving the Son” (Jn 3:16) and this Son, rich in the love of the Father, lives this gift in the first person: “This is why the Father loves me: because I give my life […] No one takes it away from me: I give it of myself.” (Jn 10:17). We rely on and trust in delivery, knowing that everything is possible to the Other. Jesus can only be delivered because His I is founded in an Other, the font and source for Christ is the Father and this relationship leads Him not to worry about Himself, because the Relationship with the Father is the only solid certainty that it makes Him feel Son. At the origin, we have the love of the Father, who in the delivery of the Son, assumed our language, so as to make Himself understood and leaving us, thanks to Jesus, the Spirit who today puts in us, in our veins, the same logic of “Delivery” that is lived between the Father and the Son, so that we too can live it in favor of our sisters and brothers.  YOUR WILL BE DONE!

Jesus does not live this love that leads to sacrifice in a passive way or as a fatal destiny; certainly He does not hide His deep human disturbance in the face of violent death, but He entrusts Himself with full confidence to the Father. Jesus voluntarily gave Himself up to death to correspond to the love of God the Father, in perfect union with His will, to demonstrate His love for us. On the cross Jesus “loved me and gave himself up for me” (Gal 2:20). Each of us can say: He loved me and gave Himself up for me. Everyone can say this “for me”