Let us be ‘out of our mind’ for JESUS!

Jesus came with his disciples into the house.
Again the crowd gathered,
making it impossible for them even to eat.
When his relatives heard of this, they set out to seize him,
for they said, “He is out of his mind.” (Mark 3: 20 -21) 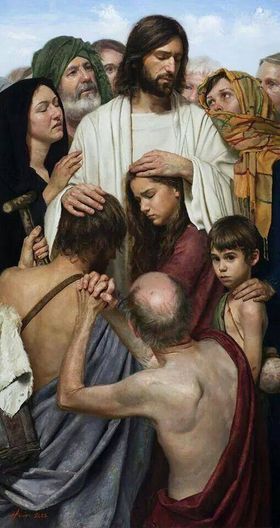 “He is out of His mind.” How many times do we hear or use this expression, more or less truthful, attributed to people who are incapable of reasoning, of controlling themselves due to strong emotions, of anger; to people who express harsh words, of rage. Today we hear this sentence attributed to Jesus. The verse tells of such a crowd so large that it did not allow Jesus and His disciples even to eat. Of someone who manages to catalyze the attention of a crowd so large that you can think or say that he is out of his mind? And if he’s out of His mind, what is that crowd? Some verses preceding this, heard on Thursday, say: “Indeed He had healed many, so that all who had some ailments threw themselves at Him to touch Him. The unclean spirits, when they saw Him, threw themselves at His feet shouting, “You are the Son of God!” He heals the sick and casts out demons. Where is His madness? Is it perhaps through madness that one can perform miracles and heal the possessed?

Certainly, those poor disciples did not know how to behave since Jesus said and did things that no one was used to either seeing or hearing. They had to continually justify His words and His actions, but He didn’t get upset, because He was profoundly free and above all this. He didn’t react to people’s rumors, but He went ahead in His mission by accomplishing the Father’s plan. Yes, one can then say: Jesus is “out of His mind”, because He completely empties Himself to make room for the other. Love leads to losing oneself for the Other. But this is not easy to accept. Especially when someone shows us how to do it with simplicity and immediacy.

By this “being out of His mind” that Jesus teaches us, is what gives us true joy, the one that arises in giving more than in receiving, which fills the heart of those who lose their life for love of the other.

Today we celebrate the memory of Saint Agnes: a twelve-year-old girl who suffered martyrdom to defend her virginity during the persecution of Christians under Diocletian. She was “out of her mind”!

Of how many men and women can we still say today that they are “out of their mind” for the Lord Jesus! Are we among them?

O Father, give us the grace to be “outside of our mind” like Jesus!”

The Voice of Joseph Moscati, Saint

Persevere in love for the truth, to the God who is truth itself, to all the virtues so that you may live your profession as a mission.