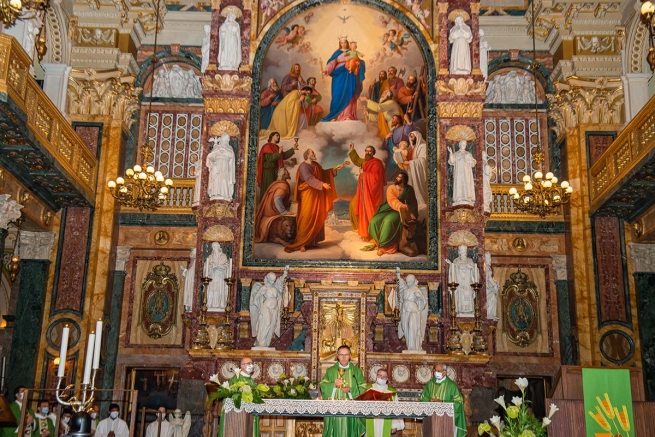 (ANS – Turin) – Among the hundreds of thousands of faithful who yesterday morning, January 30, 2022, watched the Rai 1 live TV broadcast of the Mass presided over by the Rector Major, Fr Ángel Fernández Artime, from Valdocco, there was also Pope Francis. He said it himself, overlooking St. Peter’s Square, immediately after the recitation of the Angelus: “On the eve of the feast day of St. John Bosco, I’d like to greet the Salesians, who do so much good in the Church. I followed the Mass celebrated in the shrine of Mary Help of Christians by the Rector Major, Ángel Fernández Artime; I prayed with him for everyone.”

With this particular homage, the Holy Father wished to renew once again his closeness to the whole Salesian Family and his personal devotion to the Saint of Youth. He then added: “Let us think of this great Saint, Father and Teacher of youth. He did not shut himself up in the sacristy, he did not shut himself up in his things. He went out into the streets looking for young people with that creativity that was his hallmark. Best wishes to all Salesians, men and women!”

The same message that Fr Á.F. Artime offered during the Mass he presided over in the Basilica of Mary Help of Christians in Valdocco, and concelebrated by Fr Michele Viviano, rector of the Shrine, and Fr Alejando Guevara, director of the community, with the musical accompaniment of the Choir of the Basilica, led by the Maestro Fr Maurizio Palazzo.

“Don Bosco, who loved God and the Lord Jesus so much, tried with all his strength and throughout his life to bring God closer to young people, and to prepare them for life,” the Rector Major began in the course of his homily, wisely intertwining the figure of Don Bosco with the liturgy of the Fourth Sunday in Ordinary Time.

He continued, noting that, like the prophet Jeremiah, Don Bosco too, even before his birth, had been consecrated to be a prophet among the young, to speak to their hearts in the name of God, and to help them to live as honest citizens and good Christians.

Like the prophet Jeremiah, Don Bosco too encountered jealousies and misunderstandings, and not everything was easy or simple. Yet, he remained faithful to God’s plan, and his testimony, therefore, reminds everyone that “we have always been loved”, that “our life does not take place by chance.”

Don Bosco also bore witness to charity with his whole life – that charity masterfully described by St. Paul in the Second Reading. “This was the life program here in Valdocco, for those children who had nothing and no one except Don Bosco… He always tried to live with charity and in charity. Charity is the journey, the norm of life for Christians,” continued the Rector Major.

And in front of the page of the Gospel that shows Jesus misunderstood by his own fellow citizens, as he proclaims a God who is close, “who for centuries has been crying out that there is no longer injustice towards the poor,” the Rector Major indicated the teaching of Don Bosco to his children: that of living the faith “with joy and hope” and life “with the certainty that God accompanies all our steps.”

For this reason, the Rector Major concluded his reflection by inviting all – the faithful present and those connected through TV and social networks – to take care of the least “with prayer and charity”, recalling that “God still wants that these boys and girls, especially the poorest and most needy, have at their side other people who are for them what Don Bosco was.”

The video of the Mass is available on RaiPlay.