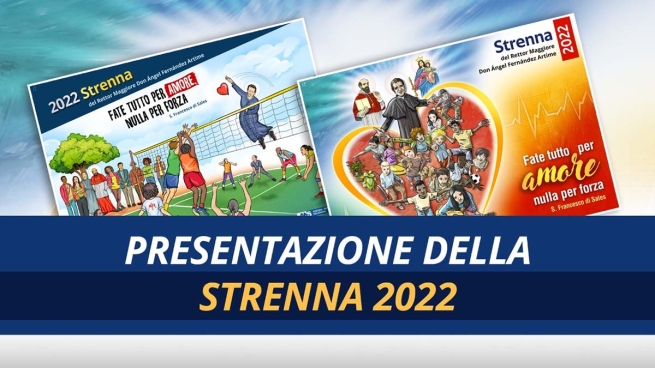 (ANS – Rome) – Everything is now ready: on Monday, 27 December 2021, the Salesian Family from all over the world will be able to watch the official presentation of the Strenna of the Rector Major, Fr Ángel Fernández Artime, for the year 2022. The theme of the message, already announced months ago – “Do all through love, nothing through constraint” – is inspired by St. Francis de Sales, on the 400th anniversary of his death, and will be accompanied by the traditional video.

As per tradition, the Rector Major of the Salesians of Don Bosco, Father and Center of Unity of the Salesian Family, will be the first to deliver his message of the Strenna for the new year to the Daughters of Mary Help of Christians at their Generalate. Fr Á.F. Artime will illustrate the message and the preview video to the new FMA Mother General, Mother Chiara Cazzuola, and to a small group of her sisters.

The presentation of the Strenna is a moment that involves the whole Salesian Family in welcoming the Rector Major’s gift of the inspiring theme of the pastoral year, which invites us to look in the same direction on Don Bosco’s steps, towards the needs of the young people and today’s society.

The public presentation of the Strenna 2022 will take place at 16:00 (UTC + 1) and will be broadcast live on the institutional channels of the Daughters of Mary Help of Christians.

Furthermore, after the presentation on December 27th, there will be another moment of great importance. In fact, on January 8th, at 2 pm, Fr Silvio Roggia, from the Department for Formation, will hold a live interview with the Rector Major, during which interesting topics regarding the Strenna will be addressed. In this episode, which will be broadcast in 5 languages ​​on the ANS Facebook page, there will also be the live worldwide opportunity to interact with the Rector Major.