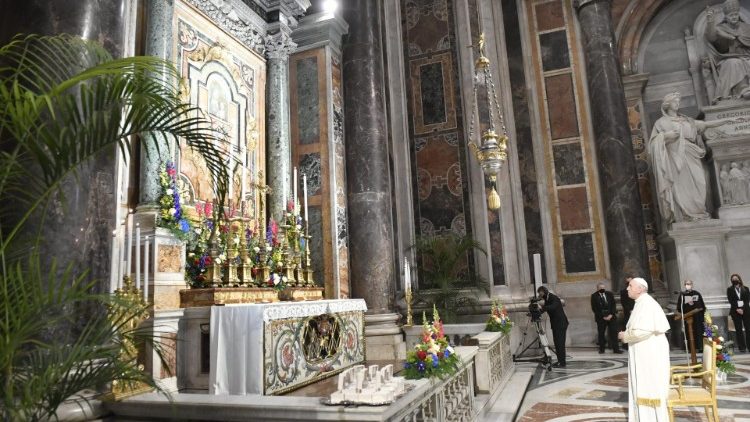 Pope opens Marathon of Prayer with Rosary in Vatican Basilica

The Rosary, led from a different Marian Sanctuary each day during May, will be broadcast by Vatican Media, beginning at 6 pm Rome time. You can follow along with the daily broadcast on our Vatican News web portal, our Facebook and YouTube channels, or via radio or television transmissions by our partner organizations throughout the world.

Pope Francis inaugurates the Marathon of Prayer for an end to the pandemic on Saturday by leading the faithful in the Holy Rosary from St Peter’s Basilica.

Pope Francis led the faithful in the recitation of the Holy Rosary on Saturday to inaugurate a “Marathon of Prayer” for an end to the Covid-19 pandemic.

In a press release announcing the initiative, the Pontifical Council for the Promotion of the New Evangelization explains that “in response to the Holy Father’s heartfelt wish, the month of May will be dedicated to a ‘marathon’ of prayer, to ask for the end of the pandemic, which has afflicted the world for more than a year now, and to ask for the resumption of social and work activities”.

For a wounded world

On his arrival in the Vatican Basilica on Saturday evening, Pope Francis was greeted by a group of young people bearing lighted candles. Accompanied by the young people, the Pope then made his way to the Gregorian Chapel, which houses the ancient image of the Madonna del Soccorso (Our Lady of Help). The image, a 16th century copy of an earlier fresco from the original St Peter’s Basilica, was newly restored in 2013, the first year of Pope Francis’ pontificate.

The Pope’s intention for the inaugural event was “for the entire world wounded by this pandemic.”

“At the beginning of this month dedicated to Our Lady,” the Holy Father said, “We join together in prayer with all the sanctuaries spread throughout the whole world, with the faithful, and with all persons of good will, to entrust into the hands of our Holy Mother the whole human race, sorely tried by this period of pandemic.”

Each day of the coming month, he said, “the many people who have been affected by the virus, and who continue to suffer the consequences of the pandemic,” will be entrusted to the Blessed Virgin Mary, “Mother of Mercy.”

After the introductory prayer by the Pope, the Rosary was led by families from Rome and the surrounding Lazio region, along with young representatives of various New Evangelization Movements. Following the Rosary and the Litany of Loretto, Pope Francis prayed in a special way for all those affected by the pandemic, including those who have lost loved ones; doctors, nurses, and health care workers; those who assist the sick, including priests and pastoral workers; scientists and world leaders.

“Most loving Mother,” he prayed, “grant that the sense of belonging to one great family, in the awareness of the bond that unites us all, might grow in the world; so that, with a spirit of fraternity and solidarity, we might come to the aid of the many people who are poor and the many situations of misery. Encourage firmness in faith, perseverance in service, constancy in prayer.”

At the conclusion of the ceremony, the Holy Father blessed special Rosaries which will be sent to the thirty-one Marian shrines taking part in the Marathon of Prayer.

“Every Shrine around the world is invited to pray, in the language and manner used locally, asking for the resumption of social life, work, and the many human activities that were suspended during the pandemic,” says the Pontifical Council for the Promotion of the New Evangelization. “This common appeal seeks to create an unceasing intercession, dispersed over the meridians of the world, which rises continuously from the entire Church to the Father through the intercession of the Blessed Virgin Mary.”

The Rosary, led from a different Marian Sanctuary each day during May, will be broadcast by Vatican Media, beginning at 6 pm Rome time. You can follow along with the daily broadcast on our Vatican News web portal, our Facebook and YouTube channels, or via radio or television transmissions by our partner organizations throughout the world.

A special prayer intention for the various categories of people most affected by the pandemic has been proposed for each day. A full list of the various shrines and the daily intentions can be found on the website of the Pontifical Council.