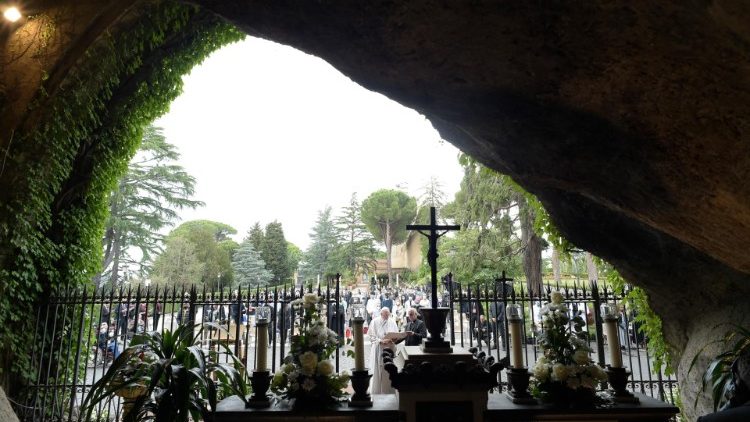 Pope Francis will lead the faithful in the prayer of the Rosary on Monday, 31 May, at the conclusion of the month-long Marathon of Prayer for an end to the Covid-19 pandemic.

Pope Francis will lead the faithful in praying the Rosary on the last day of May, concluding a month-long Marathon of Prayer for an end to the Covid-19 pandemic and the resumption of social and work-related activities throughout the world.

For the final night of prayer, Pope Francis asked that an image of Our Lady Untier of Knots be set up in the Vatican Gardens, which will serve as an open-air shrine for the occasion.

The Holy Father has always had a strong devotion toward the image, which comes originally from Augsburg, Germany. The 18th century painting shows the Blessed Virgin Mary untying knots in a white ribbon held by two angels, surrounded by biblical scenes expressive of hope, mercy, and victory over evil.

The current Bishop of Augsburg, Bertram Johannes Meier, is bringing a copy of the original image to Rome for next Monday’s event, which will then be given to Pope Francis. Bishop Meier will lead a Solemn Procession to open the ceremony, placing the icon in a “scenic spot” in the Gardens. A press release from the Pontifical Council for Promoting the New Evangelisation – which has organized the Marathon of Prayer – notes that the Pope and faithful will be presented with a “unique perspective,” with the lighted Dome of St Peter’s seeming to protect the city of Rome, “the symbol of all the cities of the world.”

Knots to be untied

Pope Francis has chosen five special prayer intentions for the concluding ceremony, five “knots” to be untied: The first is “wounded relationality, loneliness, and indifference,” which have grown worse during the pandemic.

The second knot is unemployment, especially the challenges for young people, women, and fathers of families, as well as those facing businessmen working to defend and protect their employees.

The “drama of violence” — especially violence that originates in the home, violence against women, and violence that comes as a result of social tensions exacerbated by the current crisis — is the third knot.

The Pope’s fourth intention relates to “human progress,” which should be supported by scientific research in such a way that discoveries might be accessible to all, “especially the weakest and the poorest.”

Finally, the Pope will pray for pastoral care, that Catholic communities might regain their enthusiasm and feel a new impetus in all areas of pastoral life; and that young people might be able to marry and build a family and a future.

Crowning of the Image

At the conclusion of the celebration on Monday evening, Pope Francis will solemnly crown the image of Mary, Untier of Knots.

The Rosary with Pope Francis will be broadcast live through all the Vatican media channels, including Vatican Radio and the Vatican News website, and will be accessible to the deaf and hearing-impaired through translation into Italian Sign Language (LIS).

A group of Marian shrines from around the world will be connected to Rome for the Rosary, ensuring a worldwide representation. The following shrines will take part: Notre Dame de Boulogne in France; Our Lady of Schoenstatt in Germany; Our Lady of Sorrows in Rwanda; the National Shrine of Maipú in Chile; Nuestra Senora de Os Gozos in Spain; the Shrine of Our Lady of Lourdes in Carfin, Scotland; the Basilica Shrine of La Virgen de los Milagros de Caacupé in Paraguay; and the parish sanctuary of Our Lady of Health in La Spezia, Italy.