Religious Life at the Change of an Era – An Anthology – Fr. Pascual Chávez Villanueva SDB 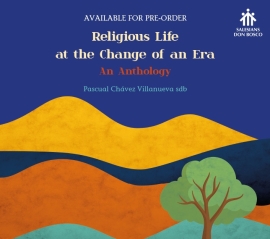 Fr Pascual Chávez Villanueva needs no introduction. This book is an anthology of talks and papers given on different occasions and to different assemblies or readers on the constant change that Religious Life has been going through and is still experiencing. These reflections have been now translated into English from the original Italian or Spanish and put together and made available to all persons in Religious Life, especially those who are English-speaking.

Editorial decisions were not taken just for the sake of style in itself. Rather, they were taken in line with the awareness of the true “kairòs” moment that Religious Life is in according to Fr Chávez, and which he instilled in his original audience. It is hoped that such awareness is also instilled in the readers of the present book.

In the Preface, Fr Chávez gives a short account of the history of Religious Life throughout the centuries so as to put his readers in context. Arriving to the present moment, he writes:

“Although reaffirming this constant change within Consecrated Life, however we must also affirm that since Vatican Council II, it is being called to a profound renewal by returning to its sources – Christ, the Founders, the signs of times. Indeed, Consecrated Life has never ceased to change, without ever reaching one definite form. Precisely this is because being life, it must always be dynamic, and in its being consecrated it must always verify, time and again, its total belonging to God.”

Loyal to both Don Bosco as founder, and to the signs of the times, Fr Chávez encamps his thought and insight on the solid ground of Pope Francis’s own teachings, referring also to Bergoglio’s teachings as a Cardinal, just a few years before being elected Pope. Again, from the Preface:

“The last four chapters present a thought about some of the most important themes for the historical project of the Church according to Pope Francis and which will obviously become traits that are to characterize Consecrated Life today.”

Even if the last four chapters focus in a particular way on Pope Francis’s teachings and message, these may be found throughout the book, as Fr Chávez applies them to the reality of Religious Life. It is for this reason that the term “change of an era” was seen fitting for the title of the present book. It is a direct reference to Pope Francis’s specification that we are not simply in an era of change, but in the change of an era.

This book is an encouraging volume that reflects an author of both experience and insight. It encourages, yet poses a challenge to its readers to reflect on their life and charism at their core. It is hoped that its readers ­– persons from all Religious Orders, Congregations, and Institutes, both male and female – truly find the inspiration they need to live up to the new creation of the Spirit as He remoulds Religious Life in His image.

The book can be bought only by sending an email either at donboscofoundation@sdb.org.mt or on info@salesianpress.com