by SrDeniseSickinger | Jan 8, 2022 | Accompaniment, Ad maiorem Dei gloriam and the salvation of souls!, Sacred Heart of Jesus, Salesian Spirituality, The Holy Sacrifice of the Mass | 0 comments 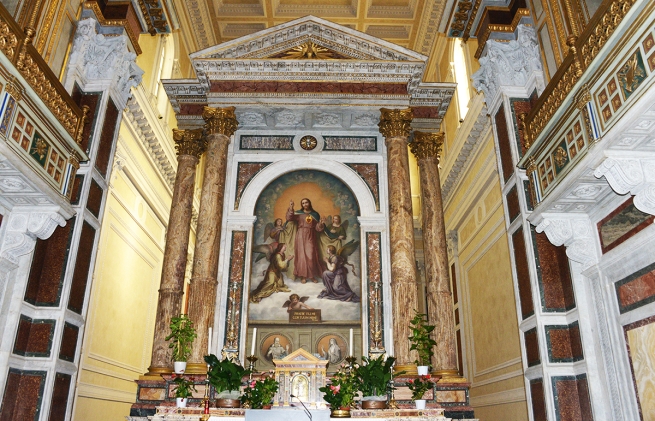 (ANS – Rome) – After just a few days of broadcasting, there has already been much positive feedback to the transmission of the Eucharist from the Salesian Basilica of the Sacred Heart of Jesus in Rome – every day, three times a day, live on TV2000, and Sunday also on Canale 5. And on Sunday 30 January, on the eve of the Feast of Don Bosco, Rai 1 will also broadcast a “Salesian” Mass with live coverage of the Eucharist that the Rector Major, Fr Ángel Fernández Artime, will preside from the Basilica of Mary Help of Christians of Valdocco, Turin.

Starting from 1 January, and for the whole month, TV2000 (channel 28 of the Digital Terrestrial, 157 of the Sky platform), the television broadcaster of the Italian Episcopal Conference (CEI), is broadcasting Masses live every day from the Sacred Heart at 7, 8:30, and 19 (UTC + 1) – the latter also retransmitted simultaneously by Radio InBlu, the radio station of the CEI, and on www.vaticannews.va.

Furthermore, on Sundays 2, 16, 23, and 30 January, the Mass celebrated in the Basilica of the Sacred Heart at 10 am (UTC + 1) is also broadcast on Canale 5, which on those occasions provides the live coverage.

And now the confirmation of the live broadcast on Rai 1 of the Mass on Sunday 30 January at 11 am (UTC + 1), from Valdocco, has also arrived, an event that completes this Salesian January with a great presence on the television networks of the homeland of Don Bosco.

These results are the fruit of the commitment that the Rector Major’s Secretariat is carrying out with a view to serving the entire Congregation. In particular, as regards the daily broadcast of the Mass on TV2000, it should be noted that this is the successful, happy outcome of a larger project, which starting from a meeting between the Rector Major, Fr Á.F. Artime, and the Director of TV2000, Dr. Vincenzo Morgante, envisages several opportunities for collaboration between the two respective realities. An example of this agreement was also the interview with the Rector Major aired on the “Soul” program on TV2000, last December 5, 2021.

Meanwhile, the parish priest of the Basilica of the Sacred Heart, Fr Guido Novella, already known as an expert liturgist, shared his enthusiasm and satisfaction for these first days of broadcasts.

Father Guido, what feedback have you had so far?

“I must admit that so far I have received many positive responses, the parish community is happy, they have appreciated it, although certainly the broadcast also requires sacrifices and changes to one’s timetables and habits. And, indeed, I have also received requests to receive the texts of the homilies, which in any case will be published on the basilica’s website. For us, it is certainly a beautiful experience, not so much to propagandize Don Bosco, who does not need it, but to offer a service to the Church, through Liturgies that are well cared for and centered on the word of God.”

How did you organize for the broadcasts?

“It was not easy to prepare everything well because our Church, among the three most important in the Salesian Holy Land, along with Colle Don Bosco and the Basilica of Valdocco, is located near the train station, in a transit area … Every year, about 800,000 people visit, but being able to create a community with such a transitory presence is not easy. To offer a well-curated liturgy, we have involved various groups of the Salesian Family, Salesian novices, local female religious, novices …

What, in your opinion, are the most beautiful fruits of this opportunity?

Probably for us, it is precisely to rediscover and form a community of people committed to the Eucharist. In addition, then, to the possibility of discovering, through high-quality close-up shots, details of the many works of art in our basilica that not even we usually see. Indeed, in this regard, it is good to point out that on the website of the Basilica of the Sacred Heart it is now possible to see as many as 28 artistic videos on the artistic splendor of the church, its paintings and its marbles; and a video that helps one to pray starting precisely from the elements present in the church.