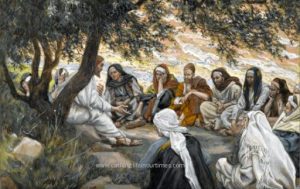 As Jesus was going up to Jerusalem, he took the twelve [disciples] aside by themselves, and said to them on the way,  “Behold, we are going up to Jerusalem, and the Son of Man will be handed over to the chief priests and the scribes, and they will condemn him to death, and hand him over to the Gentiles to be mocked and scourged and crucified, and he will be raised on the third day.” (Matthew 20: 17-19)

Jesus is approaching the time of His Passion and Death.  He is walking with His apostles near Jericho from where He will begin going up to Jerusalem, a one day’s journey to reach the Holy City.  He feels the need to share with His most intimate followers, the tragic event that awaits Him.

For the third time, He gathers His disciples around Him and repeats the mystery of His proximate death.  Every detail is described and suffered.  In spite of this, the disciples will have none of it.  But the Teacher insists, “the Son of Man will be handed over to the chief priests and the scribes, and they will condemn him to death.”  Jesus hands Himself over into the hands of men.  It is the greatest proof of love to hand Himself over like a lamb to His murderers.  He will be mocked, scourged, crucified.

“The wisdom of God is derided as foolishness.  The freedom of God is nailed like a criminal by our slavery.”  But violence is not the last word.  God reserves to Himself the end of the greatest drama in history.  He will rise on the third day.

The voice of Cardinal Maria Martini