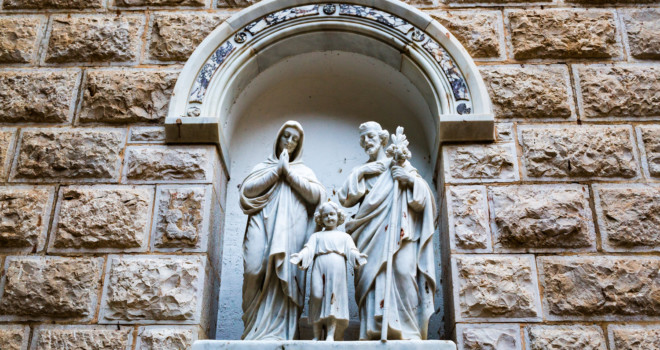 Natural Family Planning (or NFP, as it is more commonly called) is a natural, scientifically based method of child-spacing that is effective, morally acceptable, and… hard.

The harder side of NFP, though, is not unique to couples who practice Natural Family Planning—periods of abstinence. In any marriage (even in marriages not using NFP), periodic abstinence may be required. Abstinence is necessary in the weeks after childbirth, for example. It may also be required when a spouse is ill, or one of them needs to travel for work or the military. Abstinence might be necessary before or after surgery, and it may also need to be practiced during all or part of a woman’s menstruation.

The great lie of contraception is that it can prevent times of abstinence. That is not possible. Abstinence is part of every marriage.

What makes NFP challenging is that it often requires intentional, prolonged periods of abstinence. Just about every woman I know has a story of months of abstinence postpartum, for example, as a woman’s signs of fertility can be confusing before the return of her first menstrual period.

These times of abstinence are invitations for a couple to grow deeper in other aspects of their relationship… but they are still painful. Marriage is ordered towards physical union, and it is healthy for couples to desire each other in this way. Having to abstain for periods of time—due to health reasons or need to avoid pregnancy—is a cross.

The Marriage of Joseph

Mary and Joseph never physically consummated their marriage. And, contrary to common belief, there is no concrete evidence (other than pious tradition) that Joseph was an elderly man with no interest in that side of marriage. Especially given the fact that God asked Joseph to undertake some physically grueling tasks (such as an unexpected flight to Egypt), and that God likely desired that Mary and Jesus would be taken care of for the duration of Jesus’s childhood (i.e., that Joseph would not die before Jesus grew up), it is entirely likely that Joseph was a youngish man, perhaps in his thirties.

As for Mary? She must have been beautiful. Not only must she have been physically beautiful, but she also was loving and kind and possessed deep spiritual beauty. I am sure that Joseph was not unmoved by his young wife. How could he not be in love with her?

If that is so—how was it that he was able to remain abstinent in his marriage to her? Did they avoid physical affection of any kind? Certainly not. How could he not hug her or hold her hand or comfort her in his arms when she was tired or scared? Did they avoid spending too much time together so that abstinence would not be too hard? No. Their house was likely a small one, and they spent much of their time in close proximity to each other.

How then, could they have been so intimate with each other spiritually? How could their marriage have been so real, so genuine, and so loving?

Although it runs contrary to everything that the culture tells us, sexual union is not intended just to orient a couple towards each other. It is an invitation to glimpse ultimate union with God. The loving, intimate, longing gaze of a couple is meant to point them to the loving, intimate, longing gaze that God bestows on each of his beloved ones. It is no coincidence that the great mystics—St. Teresa of Avila, St. John of the Cross, St. Catherine of Siena—all compare mystical union with Christ to the marital embrace. Although these mystics were all unmarried, a married couple can understand the analogy in real, concrete way.

If lived out most fully, all aspects of marriage bring a couple to union with Christ—even and especially, the marital embrace.

Union in Mary and Joseph’s Marriage

If the ultimate goal of physical union in marriage is to bring a couple to deeper contemplation of and union with Christ, then there is a certain sense in which Mary and Joseph did not need that physical union in the way that ordinary couples do. They did not need a sign that pointed them to contemplation of Christ. They had Christ right there, in the heart of their home and family. Together, they contemplated him, every day. He was the focus of their lives and their hearts, and their parenting of him was at the center of their marriage. He was the one who united them, who wove their hearts together perfectly.

Mary and Joseph, in their abstinence, were nonetheless perfectly united — united in their love for Christ.

Joseph as Patron Saint of NFP

Although it is not one of his official titles, I wager that St. Joseph would be a perfect patron saint for couples practicing NFP. In a world that tells couples that the success of their marriage is determined by the number of times that conjugal union happens, Joseph reminds them of the truth. Married physical love is a gift, but it is not the end in itself. It is ordered to contemplation of union with Christ.

In times of abstinence, Joseph can remind husbands and wives that a marriage centered on Christ will never lack in unity. Rather, Christ will be the love that binds them. In times when abstinence is not necessary, love of Christ can impel couples to seek him in all aspects of their marriage—including their physical union. In times of abstinence, love of Christ binds them even more perfectly together than conjugal love could. Joseph’s marriage to Mary is proof of that—a marriage focused on contemplating and loving Christ together is the happiest marriage of all.

image: A statue of Joseph, Mary, and Jesus at the Basilica of the Annunciation (Nazareth) by Logan Bush / Shutterstock.com

Michele Chronister is a wife, and mother to three little girls and one little one in heaven. She received her BA and MA in theology from the University of Notre Dame (’09 and ’11). She is the author of a number of books, including Handbook for Adaptive Catechesis, the co-author of Faith Beginnings – Family Nurturing from Birth Through Preschool, editor of the book Rosaries Aren’t Just for Teething, as well as an assortment of Catholic children’s books. In addition to writing, she also homeschools her daughters, and is the social media manager for the Office of Natural Family Planning in the Archdiocese of St. Louis. When her oldest was a baby, she realized that their family life had taken on a sort of monastic rhythm – eat, pray, play, sleep. Prompted by this, she started the blog My Domestic Monastery (www.mydomesticmonastery.com), where she shares inspiration for families wanting to grow in holiness.