Now Stephen, filled with grace and power, was working great wonders and signs among the people.  Certain members of the so-called Synagogue of Freedmen, …came forward and debated with Stephen, but they could not withstand the wisdom and the spirit with which he spoke. They stirred up the people, the elders, and the scribes, accosted him, seized him, and brought him before the Sanhedrin.  But he, filled with the holy Spirit, looked up intently to heaven and saw the glory of God and Jesus standing at the right hand of God, and he said, “Behold, I see the heavens opened and the Son of Man standing at the right hand of God.”  But they cried out in a loud voice, covered their ears, and rushed upon him together… As they were stoning Stephen, he called out, “Lord Jesus, receive my spirit.”   Then he fell to his knees and cried out in a loud voice, “Lord, do not hold this sin against them”; and when he said this, he fell asleep. 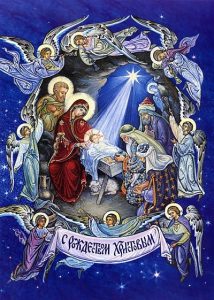 We have just celebrated the birth of Jesus and today the Liturgy presents us with the birth of Stephen into Heaven.  He is traditionally called the first martyr.  He is in fact, the first fruit matured from the preaching of the Gospel of Love.  During the Octave of Christmas, by recalling three witnesses who are like a crown for Baby Jesus, the Church wishes to show the scope of Jesus’ birth: to bring everyone to Heaven, to the Love that never ends.  Today’s first reading of the Acts of the Apostles is the principle source for knowing the holiness and martyrdom of Stephen.

It is written of him that “he was full of grace and the power of the Holy Spirit”.  He is the first of the seven deacons chosen by the Apostles for the service of charity to the poor.  He is an excellent preacher of Christ’s Gospel, so much so, that his adversaries “could not withstand the wisdom and the spirit with which he spoke”.  He is the protomartyr of Jesus.  In fact, his stoning took place ‘outside the city’, and exactly like Jesus, he prayed for and forgave his murderers.  “Lord, do not hold this sin against them”.  With his forgiveness, he teaches us that true martyrs do not hate anyone, but give their life so that everyone, including their killers, may accept the message of Christ.

The first Christian martyr, Stephan leads the innumerable procession of all those of every time and place have witnessed and continue to witness to the Gospel, even to the extreme sacrifice of their life.

The Voice of Today’s Liturgy

Father, grant that we may express with our life, the mystery we celebrate today on the birth of St. Stephen first martyr and teach us to love those who following his example, prayed for their persecutors as they died.

Institute of Daughters of Mary Help of Christians, Via dell’Ateneo Salesiano 81, 00139 Rome, Italy