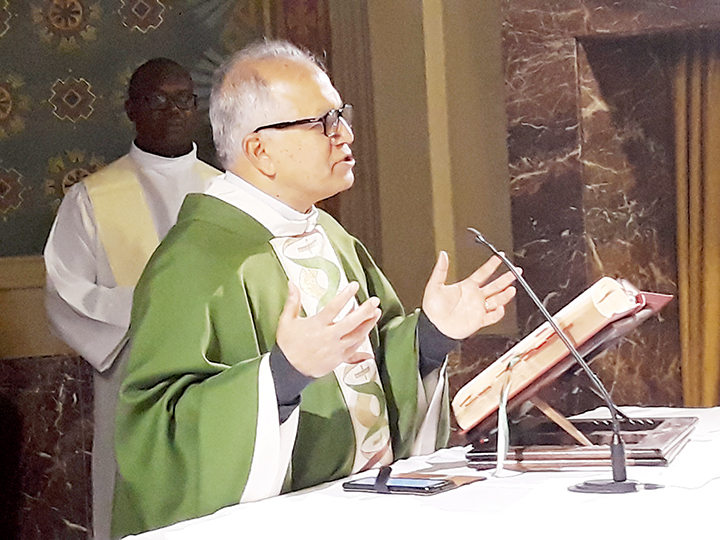 Valdocco, Turin, 18 February 2020 — We began with prayers at 6:45 in the morning. The Chapter members were divided into language groups for the prayers. The English Language Group gathered for Lauds, Meditation and Eucharist at the Parish Church of Mary Help of Christians (known as the “Succursale,” which is apart from the Basilica, but right at the Piazza Maria Ausiliatrice which is in front of the Basilica. This was the spot where Don Bosco used to gather the boys, among the last places before he got the Pinardi shed. This was also the first house of the Salesian Sisters in Turin.

Fr Ivo Coelho celebrated the Eucharist with the English Language Group. He gave a beautiful reflection on the Gospel reading (Mark 8:11-13), where Jesus refuses to give a sign to the generation that was seeking a sign. Fr Coelho reflects on this discourse on the sign and he relates this to signs that seem to come to the fore: that our present Chapter has returned to Valdocco, and that the Salesian Generalate has moved to Sacro Cuore. What are these signs? That we are brought closer than ever to what Don Bosco himself built. Our times ask us Salesians to return to Don Bosco – a reflection made in the last two Chapters (26 and 27).

The Chapter members gathered in the Aula Magna. The whole day was spent in listening to the Rector Major’s Report on the State of the Congregation. The General Councillors shared in giving the report related to the department or region under their care: the Vicar of the Rector Major, the Departments of Formation, Youth Ministry, Social Communication, Missions, the Secretariat of the Salesian Family, the Regions of Africa-Madagascar, Latin America (Southern Cone), South Asia, Mediterranean and East Asia-Oceania. (Tomorrow, we have yet to hear about Central and Northern Europe and Interamerica, as well as from the Economer General, the Secretary General, the Postulator for the Causes of Saints, the Salesian Pontifical University, and the Salesian Historical Institute.)

The long day was concluded with Evening Prayers and the Good Night Talk by His Eminence Cristobal Cardinal Lopez Romero, SDB, Archbishop of Rabat (Morocco). Cardinal Lopez was grateful for having been invited by the Rector Major to address the Chapter members especially since he misses the Congregation very much. He shared about his experiences in Rabat, a place where Christians are the minority, in the midst of a people predominantly Moslem. He ended his Good Night Talk with these beautiful words: “A phrase which I often tell journalists when they ask about inter-religious dialogue, about the relationship with Muslims: ‘Speak less about Muslims and speak more with Muslims,’ for people say many things about Moslems without having ever talked with them … Let us translate this as Salesians: ‘Let us speak less about young people; speak more with the young people.’ Let us translate this as Christians: ‘Speak less about God; speak more with God.’ Good night.”