The Word Was Made Flesh: An Advent Reflection on the Incarnation 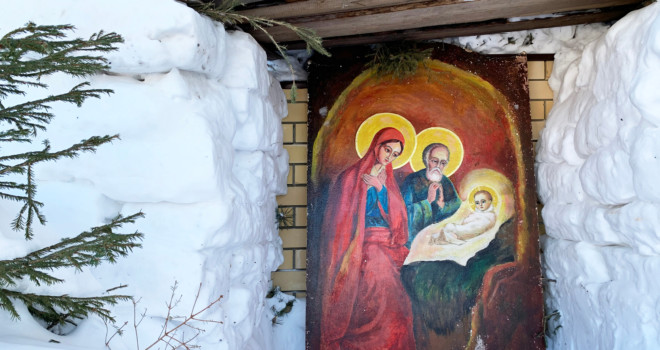 Editor’s note: The following is a homily from the Fourth Week in Advent, 2008. It was given at St. Peter’s Church, National Shrine of St. Oliver Plunkett, in Drogheda, Ireland. You can find it and other homilies in the book Advent Reflections, which is edited by Brandon McGinley and published through Sophia Institute Press.

Loreto is a small medieval city, perched atop a small moun­tain overlooking the Adriatic Sea on the east coast of Italy. If you look up from the plains below, you see a great wall reminiscent of a fortress, a forbidding citadel; in reality, it is a spiritual doorway, a place of meeting. Within the walls is a great basilica and, beneath the dome of the basilica, a marble chapel within which is an ancient house, simple in its construction but resonant with history. This is the house of Nazareth where the Annunciation took place, where it is believed the Holy Family lived and St. Joseph died — the Holy House that was and is a witness to the mystery of the Incarnation.

Loreto is a place where it is easy to pray. The ancient stones of the Holy House seem to speak, like the stones of Jerusalem that Jesus said would cry out. In this House of Mary, you are an honored guest, and her hospitality is the peace and serenity of encounter with God. Words written over the altar in that little house remind you of the significance of this place: “Here the Word was made flesh.” We believe in the Incarnation, and yet coming to the place where it happened, one encounters the mystery in a new way. Of course, we do not need to go to Loreto to experience this: We need only reflect on the account of the Annunciation and we can enter into the mystery in the Word of God.

The Holy House of Loreto stands as a sign to the world that the mystery of Christ is real. The story of God’s be­coming man is not a myth or a legend, not something esoteric or abstract or beyond our comprehension. The House is also a sign of God’s invitation for us to enter into the mystery of Christ’s life here and now. The mystery of the Incarnation is to be part of our everyday lives, because it was lived in the home of Nazareth and can be lived in every other home, in every other life.

For centuries, the people of Israel waited, hoping that the promised Messiah would come in their lifetime. It is said that every Jewish girl wondered if she would be the one chosen to become his mother. These were not entirely innocent hopes: Many Jews understood the Messiah to be a political and military leader, so the honor of being his mother would have brought with it earthly glory, a vindication of Israel, and the restoration of a downtrodden people. The mother of the Messiah would, without doubt, symbolize these things in her own person. However, who would ever have thought that the Messiah would come in such a quiet, humble way?

Perhaps the House of Nazareth was silent for the few moments following Our Lady’s assent, but no doubt Heaven was ecstatic in praise at the Incarnation of the Son of God in the womb of the Virgin, as He took upon Himself the flesh of sinful humanity and transformed it. Who would have ever thought that God would become man and live in our midst? He could have redeemed us from above, but He chose to become one of us, like us in all things but sin, even while being taken for a sinner. This is the mystery of the Incarnation that we celebrate at Christmas and prepare for in Advent.

But after those few moments of glory, it was a return to ordinary daily life for the Mother of God; the world was, as yet, unaware. With the Son of God growing within her, this first Christian disciple began the era of the New Covenant as a missionary, setting out immediately to bring the presence of Christ to one who was in need, her cousin Elizabeth. Full of grace, with the God of love within her, Mary shared that love in her act of service.

In those first moments, hours, and days of the Incarna­tion, in Mary’s service we see that the mystery must take effect in our daily lives, ordinary and humdrum as they may be. As God has become man to live His life with us, He asks us to come to Him and live our lives with Him. The Incarnation is a two-way street: God took flesh so we may come to share in His divinity. Our restoration is not to a previous life, but to a new way of living. This is the heroic way of the saints, the spiritual way that is the greatest adventure of all because it is a journey into the life of God, into His mystery, where we will find the full­ness of life. Advent is the time when we prepare for this transformation: Liturgically it is four weeks, but it is really our whole lives, a preparation for the second coming of Christ. This is what our Christian vocation is all about.

The Annunciation was the moment when Mary discov­ered her vocation, and Jesus Christ revealed His. The mys­tery of Christ’s Incarnation, of His vocation in our midst, leads us to reflect on our own vocation. At the Annuncia­tion, Mary echoed what Jesus would say in the Garden of Gethsemane: “Thy will be done.” We are called to make this assent in our lives. God has a plan for us that is firmly situated within His plan for all of humanity; we are to in­carnate Christ in the world through our lives. We have the choice to embrace that plan or to reject it, and we can even pick and choose, doing the bits we like and ignoring those we do not. God has given us the gift of free will, and He allows us to decide. Ultimately, though, our true happiness lies in assenting to God’s will, in saying yes to His plan in its totality and discerning, through prayer, what we are to do in the circumstances He presents us with.

This can be difficult. Most of the time, it seems that God speaks to us indirectly, but the truth is that He is al­ways communicating with us, and we are not always focused enough to listen. It’s usually not obvious, like the angel Clarence in It’s a Wonderful Life. More often, God asks us simply to turn to listen to Him in prayer.

Pious artists often depict Mary at prayer when Gabriel appears. Whether this reflects a historical reality is less important than that it reflects a spiritual reality: Mary was a woman of profound prayer. When the angel came, she was already tuned in to the voice of the Lord, listening to receive His word. If we wish to discover what God asks us to do at any stage in our lives, we must also be men and women of prayer. And within the context of the relation­ship of prayer, we will discover who we are and what God offers us as our vocation.

A few years ago, a friend of mine, an artist, was discuss­ing his latest project with me. He wanted to do a series of paintings on the Annunciation, and he had been studying the great masters. As an artist, and one with deep faith, he wanted to present the event in a new way, perhaps revealing a dimension that others had neglected. He told me that he was working on the expression on Mary’s face, capturing her awestruck reaction to seeing a heavenly being. I thought about it for a moment and then suggested that he look to the angel: What was the angel’s reaction when meeting Mary? After all, it was an encounter between the heavenly being and the greatest creature God had ever made, His own Mother. How did Gabriel look on Mary?

The Gospel of the Annunciation invites us to gaze on Mary and to pray in our hearts the words of the liturgy: How shall I fittingly praise you? “Blessed are you among women,” St. Elizabeth declares at the Visitation (Luke 1:42): This is humanity’s response. We hear God’s response in the acclamation, “How beautiful you are, my beloved, how beautiful you are,” from the Song of Songs (1:15), as He has filled her with His grace.

As we gaze on her face, therefore, we see the face of the Lord. In her virtues we see His. As His humanity was formed in her womb, His divinity formed her in holi­ness. In her graciousness and kindness, we see God’s as she imitates the One who made her perfect. No one was ever turned from Mary’s door, which the first Christians discovered while she was with them, and in testament the Church has loved her and praised her in every age as Mother of the Church. She is the one who can guide us to Jesus and to our place within the communion of His disciples.

In these Advent days, we not only accompany the gen­erations who were waiting for the Messiah, but we also accompany Mary in the last weeks of her pregnancy as she waited for the fulfillment of the promise made to her and to the Jewish people. Advent is Mary’s time, during which she prepares us to receive her Son as she received Him in her womb. She must have contemplated His pres­ence within her, immersed herself in His presence. In these days, we can look at her and allow her to take us by the hand and lead us into the midst of the new life Christ offers us, to discover and to live our heavenly vocation.

We are in her womb also, and she seeks to form us in the image of her Son.

Mary, the faithful one, the Mother of God, invites us today, as we ponder the Annunciation, to follow in her footsteps. At the foot of the Cross we were given into her care: We are hers. If we understand Mary’s yes to God as representing that of all men and women, then we can begin to enter into the depths of the Christian life — beginning in that little house where the Word became flesh in her so He could become flesh in us and in our lives.

This article is from a chapter in Advent Reflections: Meditations for a Holy Advent, which is available from Sophia Institute Press. We also recommend editor Brandon McGinley’s book The Prodigal Church: Restoring Catholic Tradition in an Age of Deception.

image: The image of the Nativity of Christ on the door of the Church of the Annunciation of the Most Holy Theotokos in Ivdel, photo by Ovchinnikova Irina / Shutterstock

Fr. John S. Hogan is a priest of the Diocese of Meath, Ireland, and a Secular Order Discalced Carmelite. Author and co-host of the EWTN series Forgotten Heritage, he has worked as a parish priest, chaplain, teacher, and retreat director. He is the founder of the Fraternity of St. Genesius, an association that supports and prays for those involved in the theatrical and cinematic arts.