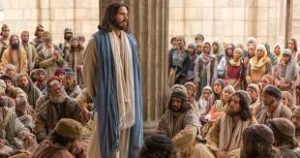 There is a young priest whose books have been read in recent times. This is Fr. Luigi Maria Epicoco. Let’s read what he tells us about understanding today’s Gospel: “If we want to annihilate a person, let’s throw a label of evil on him: ‘He is a devil.’ From then on, everything that person says and does will be viewed and interpreted with prejudice.”
It is the same thing the scribes attempt to do towards Jesus: “He is possessed by Beelzebul,” and “By the prince of demons he drives out demons.” But Jesus, with strict logic, dismantles piece by piece the prejudice of the scribes: “How can Satan drive out Satan? If a kingdom is divided in itself, that kingdom cannot stand. In the same way, if Satan has risen up against himself and is divided, he cannot stand; that is the end of him.”

In this way, Jesus not only tells us how evil is governed, but also how good is governed. So if on the one hand evil is a sort of organized crime, and its strength lies in its organization of evil, at the same time we can say that the good in order to sustain itself needs the same organization and unity. A sort of organized holiness. The secret of a ‘house that stands’ lies in the unity of the different structures. If evil has to act together in order to be evil, we can likewise say that good needs unity in order to be good. The worst that can happen to us is in fact division, and one of the ways that evil has to ruin the good is precisely to cause division. This destroys families, friendships, communities, environments, associations, situations.

Today I will pray, Lord help me to walk together on the way of the good.