FRIENDS and SERVANTS of the WORD
Thursday January 10, 2019

Jesus returned to Galilee in the power of the Spirit, and news of him spread throughout the whole region. He taught in their synagogues and was praised by all. He came to Nazareth, where he had grown up, and went according to his custom into the synagogue on the sabbath day. He stood up to read and was handed a scroll of the prophet Isaiah. He unrolled the scroll and found the passage where it was written: “The Spirit of the Lord is upon me, because he has anointed me to bring glad tidings to the poor. He has sent me to proclaim liberty to captives and recovery of sight to the blind, to let the oppressed go free, and to proclaim a year acceptable to the Lord.” Rolling up the scroll, he handed it back to the attendant and sat down, and the eyes of all in the synagogue looked intently at him. He said to them, “Today this scripture passage is fulfilled in your hearing.” And all spoke highly of him and were amazed at the gracious words that came from his mouth. (Luke 4: 14-22 a) 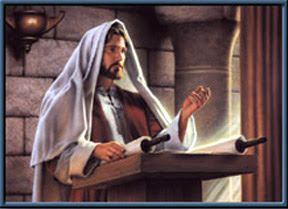 He was still the same Jesus, the one whom the inhabitants of Nazareth saw before them in the synagogue. He was one of them, the son of Joseph and Mary, from a family whose history it was possible trace, like a genealogy, the temperament of the characters and their customs. Nothing new and neither were there great expectations by those who saw returning to town that day the young son of the carpenter after a long time of absence.
Probably nothing new, not even in seeing him read before the community assembled in prayer. That Jesus had always seemed interested in religious things and many had already seen in him a potential rabbi. And yet, in the Nazareth synagogue, during that liturgy that promised nothing new, something unique in history was happening. The liturgy itself became so eloquent that it became one with life; the word so incisive that the ink almost flowed beyond the edges of the parchment roll and came into the hearts of the listeners. That day, no one could leave from there as he had come.

Today, I will ask the Lord to take from me the veils that darken my intelligence of the words and gestures of the Liturgy that I again have the grace of participating in. I will fight with passion against the laziness and condescendence to routine that risks making me boring and repetitive. When I have silenced the critical and superficial voices that whirl inside of me, then I will be more aware that it is precisely there that the Lord speaks to me.

The Voice of Martin Heidegger, Philosopher
In symbolic language, human beings do not exchange with words, but exchange in the words.