Tomorrow, May 19, 2021, presentation of IX volume of critical edition of Don Bosco’s Epistolary 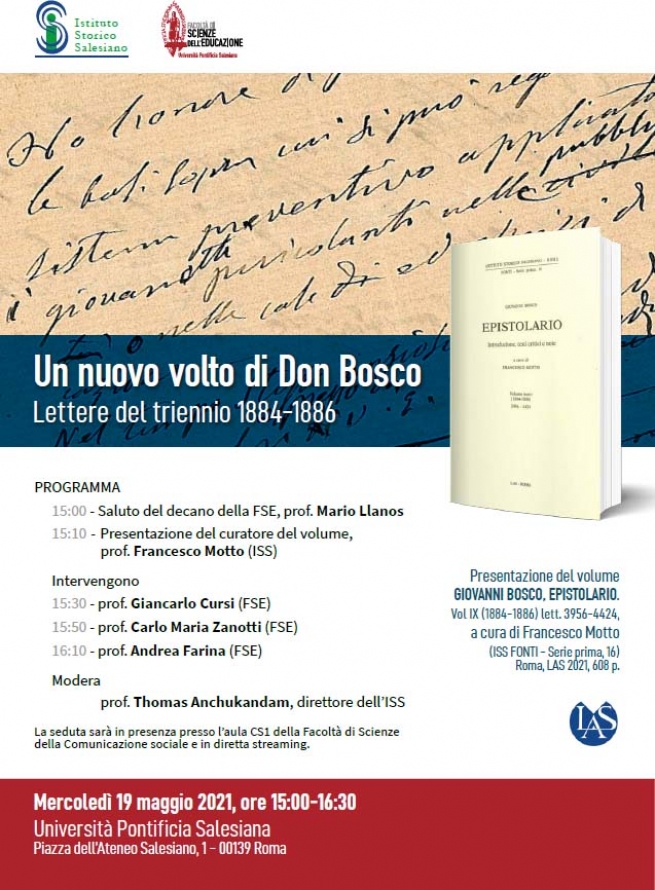 Tomorrow, May 19, 2021, from 3:00 to 4:30 p.m. (ITALY TIME; 9AM-10:30AM NY time), at the Salesian Pontifical University in Rome, the ninth volume of the critical edition of Don Bosco’s Epistolary will be presented. It collects a little less than 500 letters written by the saint in the years 1884-1886. Letters of government, letters of animation, letters of daily affairs, letters of educational formation, letters of congratulations and good wishes, letters of requests for economic aid with relative thanks… in short, a series of letters of various kinds, many of which are unpublished, addressed to every category of people: from the highest civil and religious authorities (emperors, ministers, popes and cardinals) to simple laymen, men, women and young people.  It will be broadcast: https://youtu.be/l6X0wL_LKkM

Although elderly and physically almost a “shadow of his former self,” in the three years under consideration Don Bosco continued undaunted to govern and animate the Congregation through his correspondence. He even extended them to new correspondents scattered throughout the world: French, Spanish, Portuguese, Belgian, Polish, English, German, Austrian, Hungarian, Chilean, Argentine, Uruguayan and Brazilian. What emerges is a new face of Don Bosco, in many ways current, which with the nine volumes already published and the next and last (vol. X), easily foreshadows new biography and new studies of history, pedagogy, spirituality.

As shown in the event poster, the editor of the volume, Professor Francesco Motto (ISS) and three professors of the Faculty of Education Sciences: Prof. Giancarlo Cursi, Prof. Carlo Maria Zanotti, Prof. Andrea Farina, will speak about it with in-depth knowledge. The event will be moderated by Prof. Thomas Anchukandam, director of ISS and opened by the greeting of Prof. Mario Llanos, Dean of the Faculty of Education.

It will take place in presence at the Faculty of Communication Sciences at UPS, but will also be visible in live streaming at the following link.