Upcoming General Assembly of Past Pupils of Don Bosco 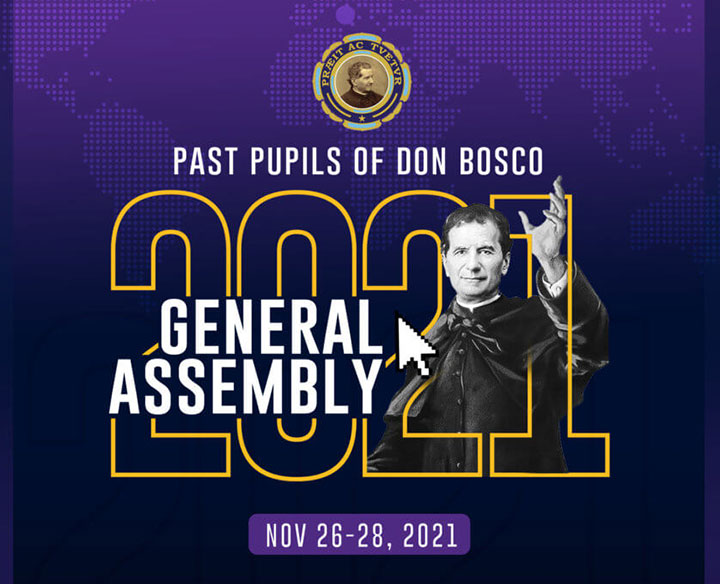 World Confederation of Past Pupils of DB, 5 October 2021 — The upcoming General Assembly of the Past Pupils of Don Bosco has been called for 26-28 November 2021 (online) by their President Mr Michal Hort. The three-day program is available online and includes reports from the 4 regions (continents) of the World Confederation as well the elections of their leadership (World Presidency) in accordance with their Statutes (ed. 2015).

In the recent ‘Exallievi Newsflash n. 43, published in 5 languages, Michal Hort shares his final greeting before the GA:

It is the time for reflection, reports, updates, elections, and changes for the future. I invite you here one more time from the bottom of my heart to participate, to join all our brother and sister Past Pupils of Don Bosco from the whole world with a live and constructive will to make our community better every day with every move. I would like to focus your attention on two important parts of the General Assembly.

First – it is the need of setting in order all conditions and needs between World Confederation and members which means having an actual statute of the national federation and no missing duties on the level of the membership. If you are in doubt or need any assistance, please check with our world treasurer Mr. Bryan Magro. (treasurer@exallievi.org) He is available for you to inform, explain and solve all kinds of needs regarding the above written.

Secondly: Regarding the technical issues, problems, questions, election nominations, and statute amendments, and changes proposals, please contact our Secretary General, Mr. Peter Kovac (secretary@exallievi.org) He is a part of the election commission and preparatory commission, so he will help you directly or will direct you to right people. Apart from Bryan and Peter, there is also a wider Preparation Commission and the whole Presidency team, preparing and working on General Assembly 2021.

I would like to use this space to say a big thank you to all of them, my personal friends, and 6-year colleagues in the Presidency team. The professionalism, courage, and wisdom of the whole team have been always motivation for me. Thanks for all the good ideas, feedback, and first of all actions. I see a lot of great work done by the Presidency on the world and local levels in the realization of many international cooperation’s and projects.

I pray for all of you, and I pray for the successful and fruitful General Assembly 2021. At the same time I would like to invite you to not only prepare and participate but also pray for World Presidency, the tasks that are awaiting us and for the blessings for all the work and efforts. May Don Bosco bless you every day so you can be and become Good Christians and Upright Citizens!”

In the ‘Newsflash’ as usual, you can find an inspirational contribution by the Rector Major (this time about our Pakistani Bosconian Akash Bashir) and by the World Delegate Br Dominic Nam (Being another Don Bosco) and the magazine’s editor Mr Pierluigi Lazzarini (The Team-play) with thanks to all who contributed during the last 6 years to this wonderful communication team.

Many would not know that Bosconian Mr Alfonso Giraudo Saavedra (Colombia Federation) was recently elected as the new OMAEC (Union of Past Pupils of Catholic Education) President. He is a 61-year-old lawyer, involved in the PPDB for the past 40 years and in OMAEC since 2017.

Last but not the least, among the numerous news from all continents, the recent 12th Asia-Oceania Regional Assembly stands out and news from Hong Kong, Indonesia, Japan, Philippines, Thailand and Timor Leste in the EAO region.

The Past Pupils ask for your prayers for the incoming General Assembly! 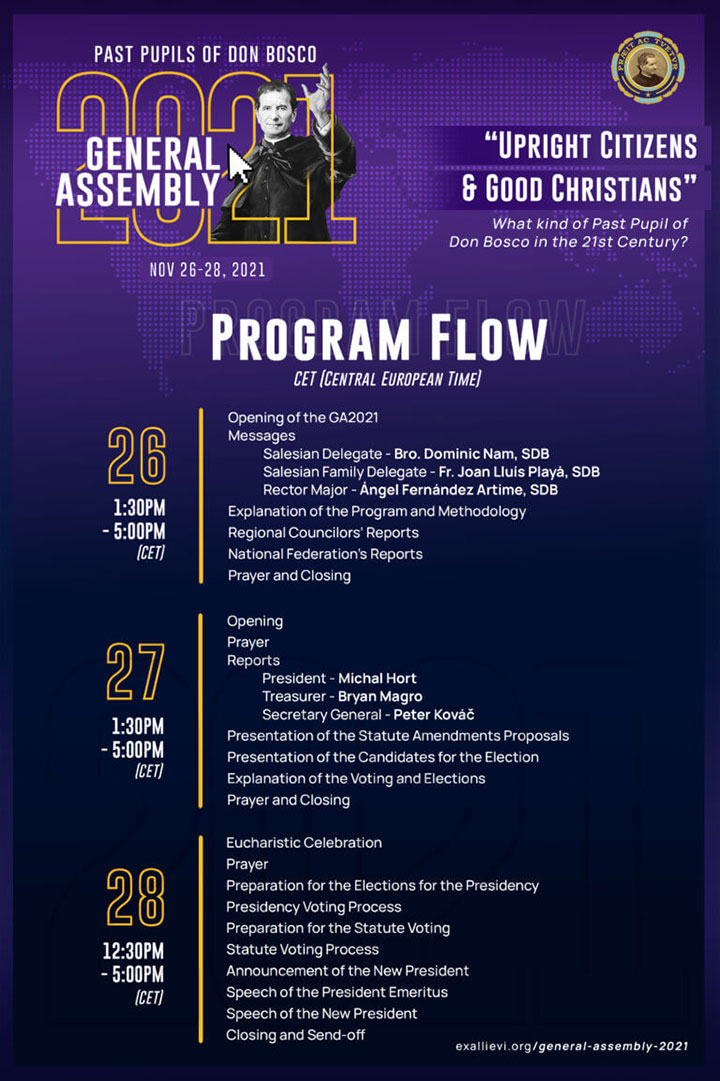 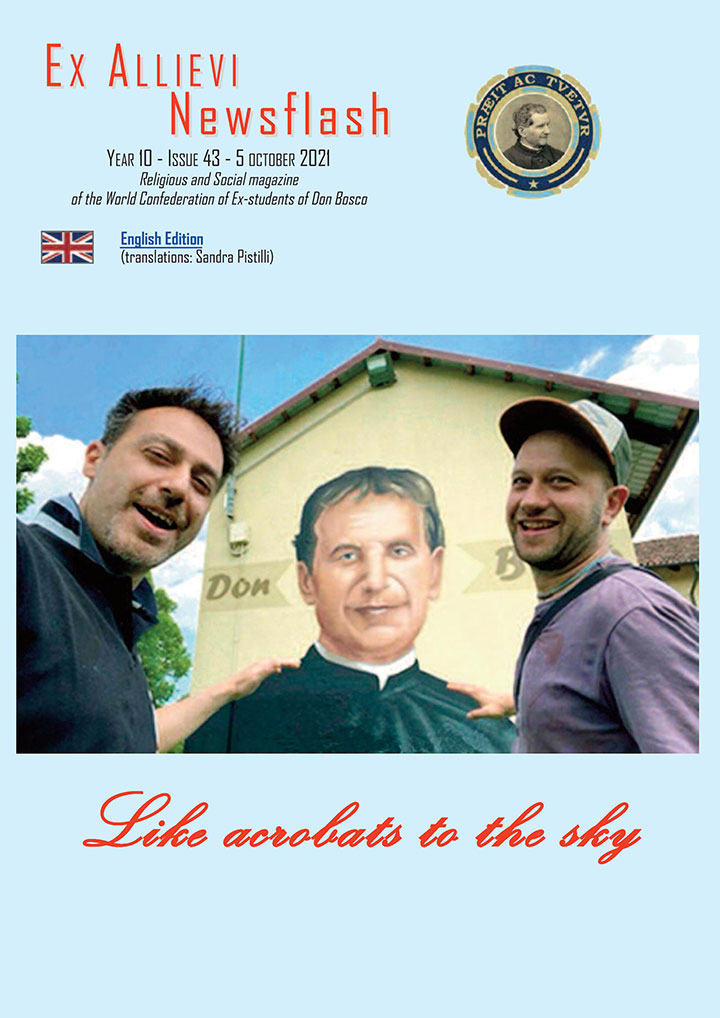 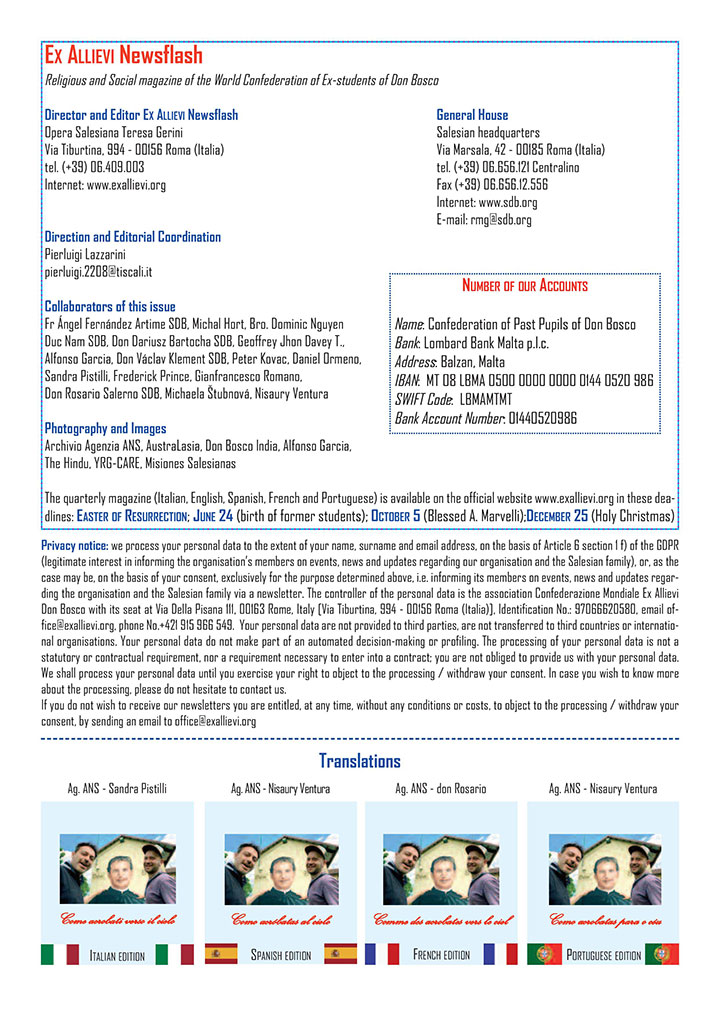 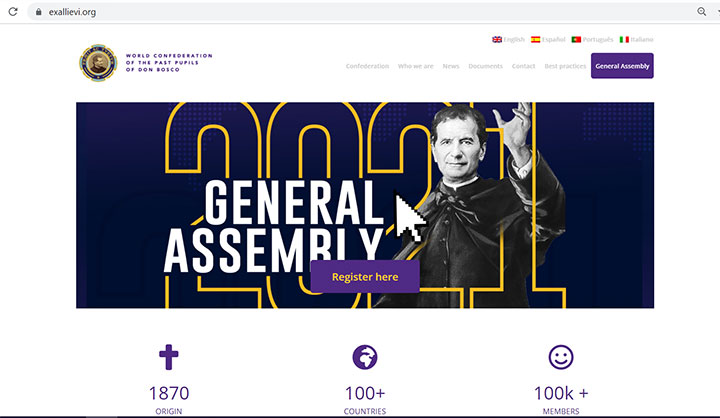 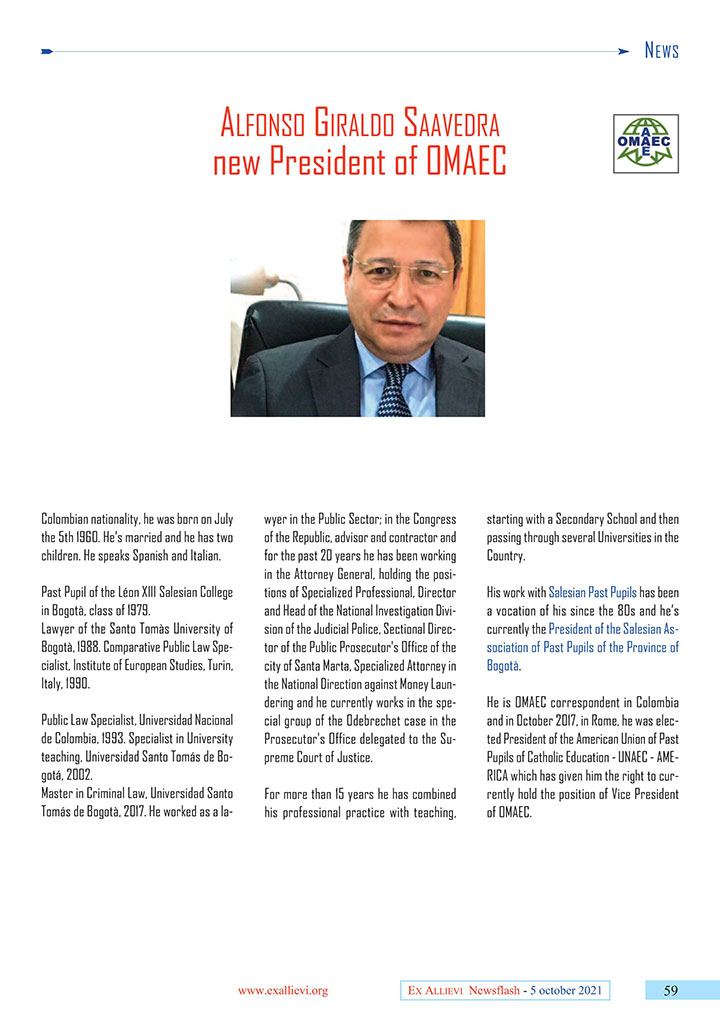 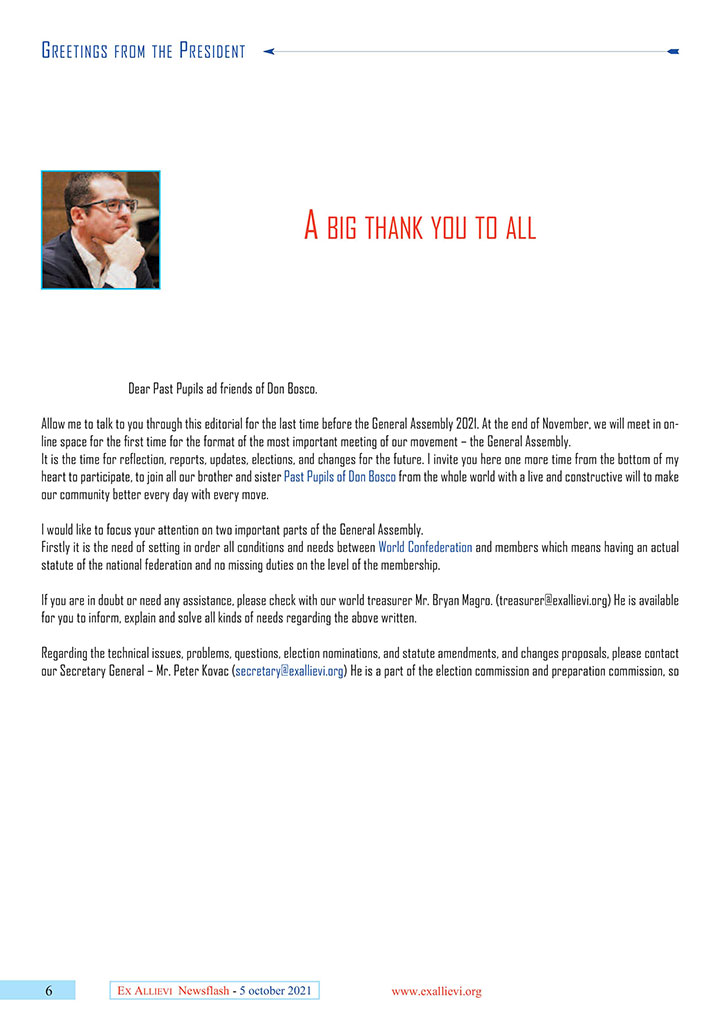 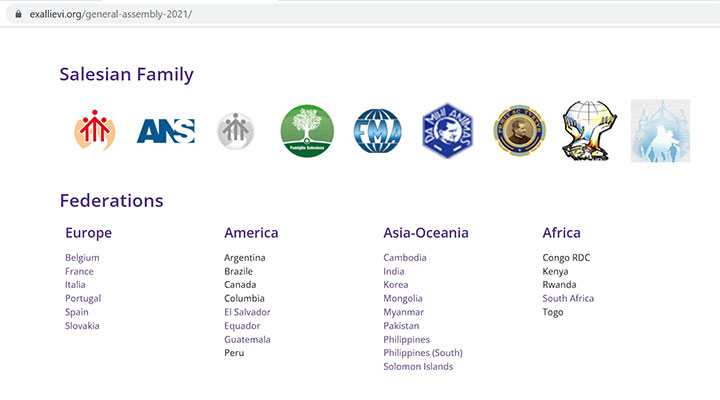 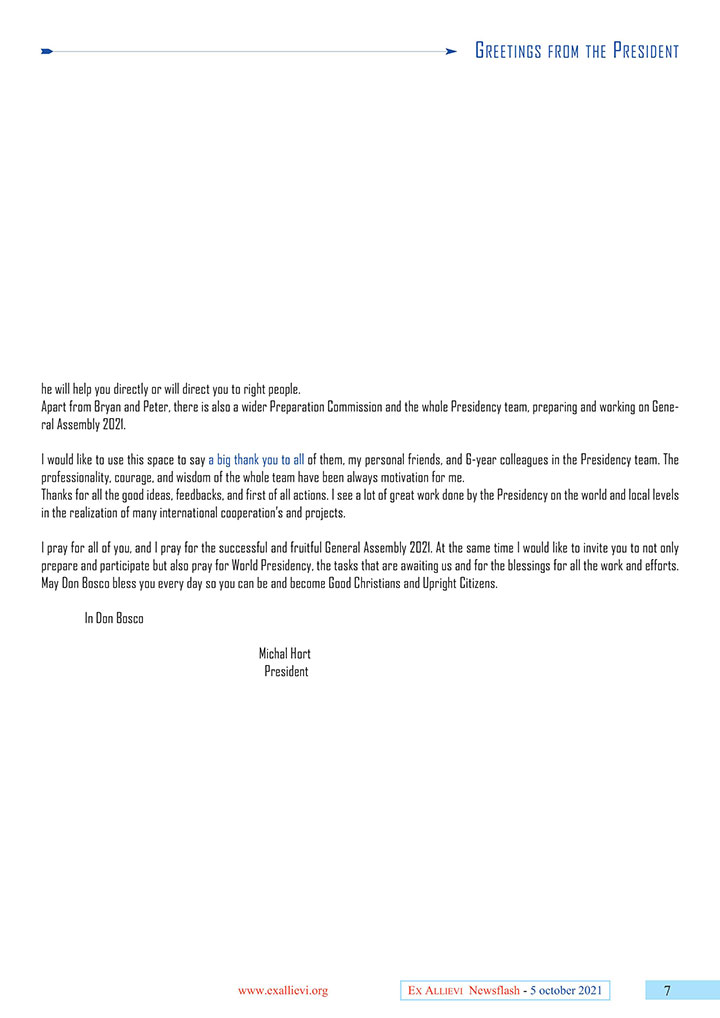