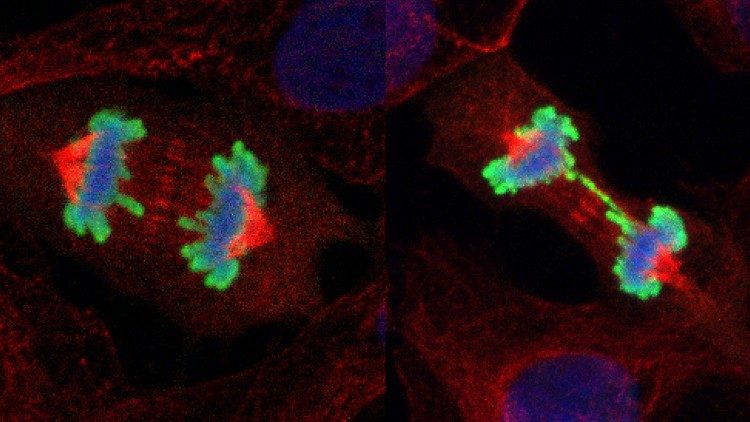 Research conducted by the Holy See’s Pediatric Hospital, Bambino Gesù, in collaboration with the University of Rome “Tor Vergata” and other European and U.S. research centres, sheds light on the cycle of cell division. The relationship between the proteins Ambra1 and Cyclin D has been identified: an imbalance can cause the process leading to a tumour. Below is a working translation of a joint press release by Bambino Gesù Hospital and the University of Rome “Tor Vergata”.

This new discovery opens the way to therapies that block the defense system of diseased cells. After decades of research and many hypotheses, it closes the circle on the mechanisms of the cell cycle, the process through which cells, including cancer cells, mature and proliferate. Researchers at the Bambino Gesù Children’s Hospital and the University of Rome “Tor Vergata”, in collaboration with other European and U.S. research centres, have discovered the missing piece: what regulates the life of Cyclin D, an essential molecule in cell division.

The switch that turns the activity of Cyclin D on and off  is a protein called Amber1: when it does not work it triggers a process that leads to the rapid formation of many types of cancer. The discovery opens the way to specific therapies that inhibit the defense system of the diseased cells up to their self-destruction. The results of the study supported by AIRC, have just been published in the scientce magazine Nature.

The cell cycle consists of a series of events concatenated and finely regulated that lead to the division of cells, a vital process through which the cells of the entire organism are formed from a fertilised ovum, as well as the process by which the cells of the skin, blood and organs are renewed. This cycle is regulated by the cyclins, a group of proteins classified with the letters A, B, C, D, and so on. Each does a piece of the work of cell division and are produced and destroyed in a precise alternation, until the birth of daughter cells.

The mechanism of regulation of these molecules was already almost completely known, except – until now – for Cyclin D. With the study coordinated by Bambino Gesù, the entire pathway has finally been defined.

Tumours: The “errors” of the cell cycle

During the process of division, the genes responsible for controlling the cell cycle can be subject to mutations from which many types of tumours originate. These abnormalities generally develop during the replication of the genetic heritage (DNA) to be transferred to the daughter cells: if the mechanism is jammed, any errors accumulated in this crucial phase become the cause of mutations, tumours and cell death.

The study that led to the discovery of the correlation between the proteins Ambra1 and Cyclin D was carried out by the researchers of the Bambino Gesù Hospital – led by Professor Francesco Cecconi of the Research Area of Oncohaematology, directed by Professor Franco Locatelli – along with the research team of the University of Rome “Tor Vergata” and has benefited from the collaboration of the Danish Cancer Society Research Centre and other European and U.S. centres.

The research has been conducted on hundreds of samples (animal models, cells produced in the laboratory, cells derived from both animal and human tumours) with a combination of advanced techniques (imaging, microscopy, fluorescence, genetic engineering, biochemistry, histology), starting from the intuition of a possible role of Ambra1 – a molecule discovered in 2007 by Professor Cecconi’s team – in some defects of the cell cycle.

During the investigations, the researchers have in fact noticed that in case of an absence of or low amount of Amber1, Cyclin D is not destroyed as it should be and, therefore, accumulates. Due to this accumulation, cells begin to divide at an uncontrolled rate, DNA is damaged and the formation of tumour masses is triggered. The imbalance of levels of the two proteins has been found in many types of cancer including lung adenocarcinoma, sarcoma and glioblastoma.

The Bambino Gesù study describes the testing of a therapy for tumors based on the imbalance of Amber1 and Cyclin D. As there are no drugs available to date that can act directly on the two proteins to restore the right amount, researchers have identified an alternative solution that exploits one of the weak points of cancer cells: the repair system.

The great speed with which cancer cells divide generates a series of errors in their DNA that are gradually corrected by a system of enzymes (present in all cells of the human body) that allows them to survive and proliferate. However, if the repair process is inhibited, the diseased cells accumulate so many defects that they self-destruct.

The therapy (a mix of specific drugs called “repair system inhibitors”) has been successfully tested on cellular and animal models: the tumour regressed and survival increased. The research, therefore, suggests that this treatment strategy, already used for the treatment of some types of human tumors, may also be applied to patients with the combination Amber1 – Cyclin D altered.

“The idea is that patients diagnosed with cancer will also be examined for levels of Ambra1 and Cyclin D,” says Francesco Cecconi, professor of Developmental Biology at the University of Rome “Tor Vergata” and a researcher at Bambino Gesù. “If the absence or low levels of Ambra1 in association with an accumulation of Cyclin D is detected in tumour cells, we could try to suppress the ability of tumour cells to repair the genetic material with specific drugs that are already used in therapy. If we could thus limit their repair, we could aim to kill cancer cells by exploiting their Achilles heel, namely that same genomic instability that induced them to proliferate.”

“Our data also extends to the processes of cell proliferation in the developing nervous system and this new level of regulation could represent a new frontier in the molecular oncology of brain tumors in children,” adds Dr. Giacomo Milletti, research biologist at Bambino Gesù, PhD student at the University of Rome “Tor Vergata” and first co-author of the study.

The results of the research of the Bambino Gesù and the University of Rome “Tor Vergata” are further confirmed by two other international studies, conducted in the United States of America – in New York and San Francisco – which, from different starting points, reach the same conclusion: Ambra1 controls Cyclin D. For the high scientific value of the discovery, the three studies have been published in sequence in the same issue of Nature.