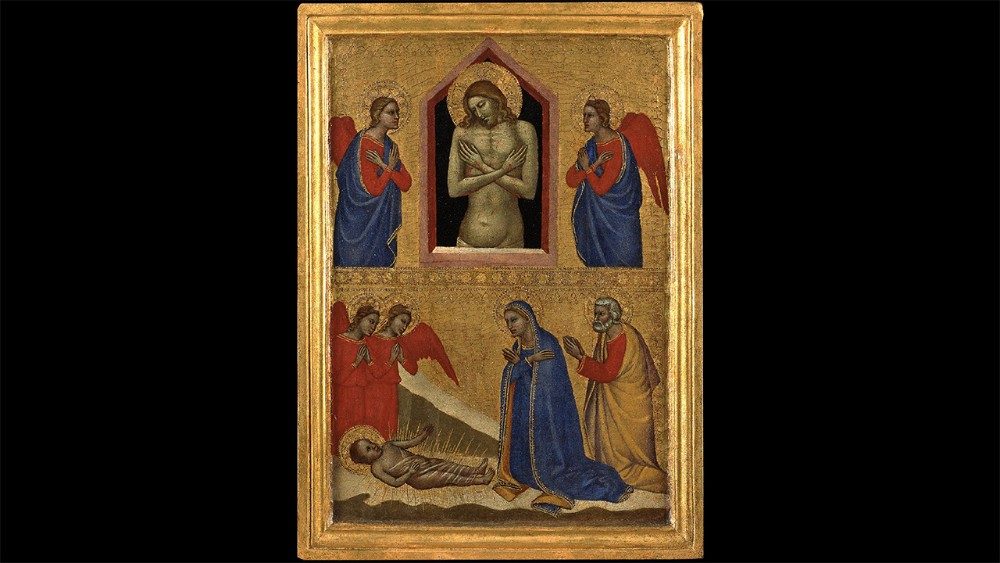 Vatican Museums: The Works of Mercy #7

“Proclaiming Christ means showing that believing in Him and following Him is not only true and right, but also beautiful. At the heart of the Gospel lies the beauty of God’s saving love, manifested in Jesus Christ who died and rose again.” Inspired by these words of Pope Francis, the Vatican Museums and Vatican News have teamed up again to explore the masterpieces in the papal collections accompanied by the words of the Popes.

Ghissi created this painting by uniting the central themes of Franciscan spirituality: the Incarnation and the Passion. They are represented in two images, one on top of the other: the Imago pietatis and the Adoration of the Child Jesus. The image of the Dead Christ seeks to evoke the Eucharistic sacrifice, with angels adoring in a tomb in the form of a tabernacle, besides the sufferings of the Passion and perhaps the feast of Corpus Christi. His birth and death—ideally connected—allude to the mystery of the Incarnation of the Son of God, who became man for our redemption.

“The Eucharist, while commemorating the passion and resurrection, is also in continuity with the incarnation. At the Annunciation Mary conceived the Son of God in the physical reality of his body and blood, thus anticipating within herself what to some degree happens sacramentally in every believer who receives, under the signs of bread and wine, the Lord’s body and blood.”

Under the direction of Paolo Ondarza