Way of the Cross: suffering seen through the eyes of children – Vatican News 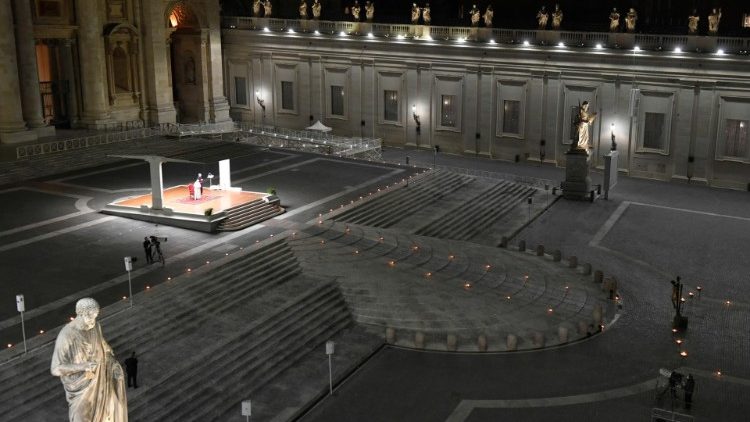 Way of the Cross: suffering seen through the eyes of children

The briefing for the Vatican’s worldwide telecasts of Holy Week and Easter celebrations offers background information on the liturgies, especially this year’s Way of the Cross meditations authored by children. More than 170 broadcast networks and outlets globally will be linked for the celebrations.

Pope Francis has called on the faithful to look at the sufferings of humanity through the eyes of children by entrusting them this year with the meditations for the Way of the Cross.  He asks us to consider more deeply their perspective of the world today, especially in this tragic time of the pandemic. The presenters at the worldwide telecasts briefing highlighted these dimensions during the Good Friday morning meeting held in the Sala Marconi of Palazzo Pio, home of Vatican News and Vatican Radio. Deputy editorial director of Vatican Media, Alessandro Gisotti, and Roberto Romolo, head of the International Relations Office of Vatican Media, hosting the meeting, remembered that today marks the 16th anniversary of the death of St. John Paul II, who participated spiritually in his last Way of the Cross on March 25, 2005, an unforgettable moment captured on video showing him viewing the celebration from his private chapel.

Remembering St. John Paul II on the 16th anniversary of his death

The briefing noted that also this year the celebrations are greatly affected by the anti-Covid19 health safety measures, especially with regard to limited participation in the events. This year as well the Way of the Cross will take place in St. Peter’s Square: the Stations will be placed around the obelisk and along the path leading to the raised area in front of the Basilica. Particularly significant this year is the choice of placing candles that trace the path from one Station to another. Together they will form a large luminous cross that stretches over the empty square. The cross will be carried by a group of young people and educators entrusted with the meditations this year and read by the authors themselves. Each meditation corresponds to a drawing that will be shown on live television.

The celebration of the Easter Vigil will not include baptisms, but the renewal of baptismal promises. The Easter Mass will be celebrated at the Altar of the Chair of Saint Peter’s Basilica where the Pope will deliver his Easter message and impart his blessing “Urbi et Orbi”, to the city of Rome and the world. The cardinal who will announce the granting of the plenary indulgence before the Pope’s blessing this year will be Cardinal Mauro Gambetti, the newly appointed archpriest of Saint Peter’s Basilica. Last Christmas, his predecessor, Cardinal Angelo Comastri undertook the same role.

Way of the Cross meditations written by children: Jesus calms our fears

Angelus and General Audiences in Sign Language on Vatican News

The Easter floral arrangements in Saint Peter’s Square are provided once again by Dutch florists, now the 35th year in doing so, a tradition paused last year due to the pandemic. The Dutch florists will feature in particular Avalanche roses for the Altar of the Chair of Saint Peter’s. The florists are also expressing their closeness with those suffering from the pandemic by donating some of these roses to residences for the elderly in Rome.

More than 170 broadcast networks and outlets around the world will be taking the broadcasts with distributions through international media agencies as well. The global coverage has taken much wider impact over the years through live streaming. This year in particular a service in sign language is being offered thanks to the “No one left out” project launched by the Dicastery of Communication.

Source: Way of the Cross: suffering seen through the eyes of children – Vatican News