CANADIAN PILGRIMS HONORING OUR LADY AT HER SHRINE IN LOURDES, FRANCE

We are the Sons and Daughters of St. John Bosco who work and live in the eastern United States and in Canada. We belong to a worldwide Family, a “vast movement of persons” at work in over 130 countries for the entire well-being – physical, material, emotional, intellectual, and spiritual – of the poor, the ill, the weak, and the marginalized, but most especially of poor and abandoned, at-risk, young people.

Ours is a Family “totally of Mary.” Don Bosco himself always taught that it was “Mary who has done everything.” She was the teacher whom Jesus, Her Son, entrusted to him in his Dream of Nine Years Old. It was she who guided Don Bosco in his work with the young and in the founding of his Religious Family.

The apostolic Family of Don Bosco is called Salesian because it is linked to Saint Francis of Sales, whom Don Bosco chose as his inspiration and patron as with his work and writings he proposed that Christian humanism and that expression of charity which corresponded so well to his intimate aspirations. It is a humanism that does not ignore man’s weakness, but is based on an unshakable confidence in the intrinsic goodness of the individual who is loved by God, and by Him called to Christian perfection, in every state of life.

This humanism is a constitutive element of the charismatic and spiritual experience of the Groups founded by Don Bosco, and as a precious inheritance has been made their own by the other Groups which today are aggregated to the single Family. The whole Salesian Family, therefore, enters into this large movement, offering to the Church an original contribution in the field of education and in apostolic work.

Parts of these sections have been adapted from: the Charter of the Charismatic Identity of the Salesian Family of Don Bosco 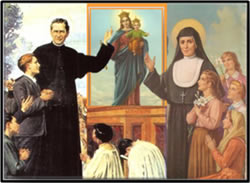 Don Bosco, through the direct intervention of the Blessed Virgin Mary, inspired this vast movement of people, called the Salesian Family, who in different ways work “for the greater glory of God and for the salvation of souls, especially of poor and abandoned youth.” He himself founded not only the Society of St. Francis de Sales (Salesians of Don Bosco – SDB) but also the Institute of the Daughters of Mary Help of Christians (the Salesian Sisters – FMA – along with the Co-Foundress, St. Mary Domenica Mazzarello), the Association of the Salesian Cooperators (ASC), and the Association of Mary Help of Christians (ADMA). Including these and others that originated in different parts of the world, founded by members of the original four Groups named above, the Salesian Family today consists of 30 officially-recognized groups that have a total of 402,500 members.

Ours is a charismatic and spiritual community comprising different Groups, officially established and recognized, and linked together by ties of spiritual relationship and of apostolic affinity. Yet, these Groups are unique in the gender of those who belong, male and female; their specific vocations, Religious and Lay; the individual ministries they carry out; their state in life as married or celibate; the Statutes by which they live; and the variety of social, cultural, religious, and ecclesial contexts in which they work. Don Bosco’s charism continues to inspire people of good will. There are currently 23 more groups that are seeking membership within the Salesian Family.

Some members of 12 of the 30 Official Groups make their home and live their mission in the eastern United States and in Canada. Unity [among us] is nourished by the common baptismal consecration by which all are drawn into the Mystery of the Trinity and in communion with the Church; by participation in the Salesian mission at the service of the young and the poor and for the  promotion of a new Christian humanism; by a new sense of citizenship and solidarity on a global scale; by sharing the spirit of Don Bosco; by the exchange of spiritual gifts within the Family; by a common reference to Mary Help of Christians and to Don Bosco, their holy Founder or Patriarch; and by the special link with the Rector Major, the successor of Don Bosco. 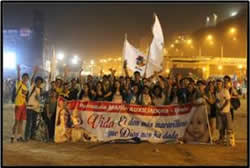 The Salesian Family consists of Christian men and women, consecrated men and women who with the individuality of their own charism and spirit, place themselves at the service of the mission of the Church, especially in the vast world of youth, in working class areas, for the poor and for peoples not yet evangelized (apostolic).

Living at the heart of the Church and carrying out the Salesian mission, it reflects the different gifts, unites together particular vocations within a single spiritual and apostolic Family, expresses communion between the various different ministries, all directed towards the service of the people of God (catholic).

Being present in the local Churches, it fosters communion among its members and with the Successor of Peter, in this way re-living the devotion to the Pope handed down by Don Bosco (one); it participates in their apostolic activity, offering its own particular contribution. especially in the area of the mission to the young and to the working classes; it promotes understanding and collaboration with other groups and institutions for an all-round education of the individual; it takes care of the vocational guidance of the young, educating them to the faith and setting them on the way to an apostolic commitment in the Church and for the world. In order to carry out their educational mission the various Groups make good use of the support of the Past Pupils including those belonging to other religions or with different views of the world (catholic). 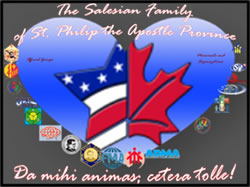 All heirs to the Salesian charism and spirit, the Groups establish among themselves a very close relationship so that each Group expresses the identity of the Salesian Family, but not without reference to the others. In fact, entering into a Group, in virtue of a specific vocation, means entering the whole Family; it is as though each one feels entrusted to the others in a mutual relationship. All this is for the benefit of the mission, since it makes it possible to undertake in a more adequate and effective manner the human development and Christian education of the young, of poor people, of the sick and of peoples not yet evangelized.

The task of seeing to the unity, growth, and collaboration among the Groups has been entrusted to the Provincial Consulta, a body comprised of the leaders of the various Groups present in that geographic territory, or of their Delegates. It meets regularly to plan formation initiatives of study and knowing Don Bosco, his mission, and his spirit; to share positive experiences in the apostolate; to have concrete experiences of the Salesian Family; to come to know and value each Group for the ultimate purpose of collaboration in the apostolate, seeking to respond in communion to the pastoral challenges of the local Church, though in varied ways according to each Group’s particular identity; to strengthen bonds with the Bishops, the local Church, and those entities of civic society that are directly involved in areas proper to the mission of the Salesian Family. 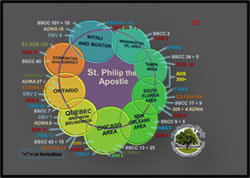 Given the length and breadth of our geographical territory, the development of local Salesian Family Commissions has been deemed indispensable so that the objectives above might be achieved with efficacy. At present there are 10 identified “areas” in our Provinces: the greater Metropolitan area of NY/NJ/Boston area; the Washington, DC area; the Tampa Bay area; the South Florida area; the New Orleans area; the Chicago area; the Quebec/New Brunswick area; the Ontario area; the Edmonton area; and the Surrey area.

BOOKS ON OUR SALESIAN FAMILY 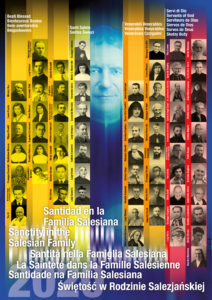 The goal of our mission is, as Don Bosco put it, “the salvation of souls and the greater glory of God.” We have been entrusted with the task of his mission to continue to raise up in the Church “good Christians and honest citizens.”

The Family of Don Bosco, developing its characteristic spirituality of charismatic origin, enriches the whole Body of the Church with a model of Christian life all its own (holy). “Da mihi animas; cetera tolle” (“Give me souls and take away all the rest”) aptly sums up the single goal and spiritual inheritance Don Bosco left to us: to be faithful disciples and apostles of Christ to cooperate with Him in saving our own souls and helping others do the same. Bearing witness to this are the numerous ranks of the spiritual sons and daughters of Don Bosco already declared Saints or proceeding along the path of beatification and canonization. These are our models, our joy (list updated December 2014):

Postulator General for the Causes of the Saints

CALENDAR OF LITURGICAL FEASTS OF THE SAINTS
(updated October 22, 2021)

Deceased Benefactors of the FMA and the Salesian Family

February 7 Blessed Pius IX, Pope, supporter of St. John Bosco in the founding of the Salesians

May 13 St. Mary Domenica Mazzarello, Virgin, co-foundress of the Institute of the Daughters of Mary Help of Christians

May 14 Commemoration of the Deceased Parents & Relatives of the FMA

May 15 Our Lady of Fatima (in the Salesian World)

May 16 St. Louis Orione, Priest, founder of the Sons of Divine Providence

May 18 St. Leonard Murialdo, Priest, collaborator with Don Bosco in the work of the oratories, founder of the Josephites

November 25 Anniversary of the death of Mama Margaret, Don Bosco’s mother.  Mass is celebrated in each Salesian house for the deceased parents of the Salesians (SDB).

December 8 Immaculate Conception of the Blessed Virgin Mary.  Birthday of the Salesian work (1841).

*Moved to a different day in the United States: